GIVE ME BACK MY BONES Mini-lessons, songs and workstation activities 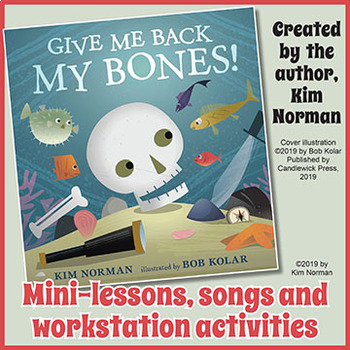 The packet includes mini-lessons, games, songs and workstation activities related to the book’s topics: bones, fish and pirates adding a special look at the bones of the spine and joints that allow us to move properly. Whether or not students have read the book (wherein readers learn the scientific names of bones), this packet includes activities that focus on the human skeletal system in a fun, non-scary, pirate-themed way.

• A Spin a Spine Game. Players build a spine from packing peanuts

• Songs and chants for hand clapping games or jump rope:

“If You’re Boney and You Know It”

• 24 skeleton cards of various animals for sorting, matching or collecting

Reviews for GIVE ME BACK MY BONES praised it as a fresh take on bones equal to Bob Barner's Dem Bones.

Budding biologists as well as general fans of pirates, poetry, and wordplay will agree—and it makes a fuller (and less freighted) alternative to Bob Barner's Dem Bones (1996) and other versions of the old teaching spiritual. Both macabre and cheery—a rare treat.

This clever, cumulative tale is enhanced by its endpapers, which feature scattered labelled bones at the front and a full skeleton at the back, and playful, dimly lit underwater digital illustrations populated by bug-eyed, curious fish. The rhyme keeps things moving despite the hefty vocabulary (Metacarpals! Phalanges!) and the illustrations make it clear what everything is. Somehow daffy and scholarly at once.

It’s a little morbid, but Kolar’s digital undersea illustrations are friendly, cartoony, and understated, with humerus, er, humorous details (i.e., a squid making off with the pirate’s radius, ulna, and belt) that are all about silliness.

Author Kim Norman has developed a name for herself among publishers like Scholastic and Penguin/RandomHouse as a skilled song writer as well as prolific picture book author. Her song-related books include TEN ON THE SLED, (based on the song “Ten in the Bed”) which has sold in the 100s of thousands, and I KNOW A WEE PIGGY, (based on “I know an Old Lady who swallowed a fly”) which was distributed to more than a third of a million children enrolled in the Dolly Parton Imagination Library program. Kim is also a fine artist, graphic artist and has worked as a professional singer. (Until she decided she didn’t like staying up past her bedtime!)

Find Kim at KimNormanBooks.com and subscribe for free new songs and activities!