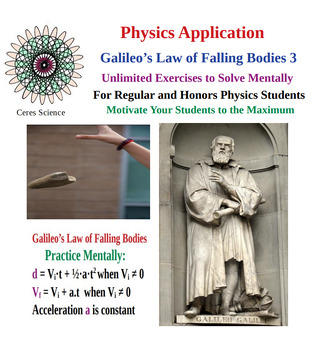 This new physics application for Windows, Galileo's Law of Falling Bodies 3, has a unique design and is intended for physics students to learn, and for physics teachers to teach kinematics in a motivating way. It presents random numerical problems, for the students to solve mentally. There is no need to use calculators. It is a great activity to solve kinematics problems mentally without using equations. Instead, principles of the Law of Falling Bodies, which is a marvelous tool, need to be applied.

The application shows four types of problems, and this is the way it works. By just pressing one key, the number 1, the application brings more problems of the same type. By pressing the number 2, the value of gravity is changed, and by pressing 3, a different type of problem can be selected. It is that simple. In a few minutes, the use of this application can be mastered.

In general, teachers need to dedicate about 3 or 4 minutes each time, practicing the same type of problem, Later, give the students exercises at random of any type. It is important that teachers also add some questions of their own. In addition, if a digital projector is used with the entire class, try pressing ALT-ENTER for the text to appear larger on the screen. One of my best memories in the many years I have taught physics, is precisely how motivated and engaged the students were during the three Galileo activities.

Using Galileo’s Law of Falling Bodies is equivalent to using the equation:

The beauty of Galileo’s Law of Falling Bodies is that it can solve quite easy some complex problems. This is one example: If a body is released from rest, in which second the distance fallen is the same as the distance fallen in 5 seconds? Using the kinematics equations, it will take more than 5 minutes of hard work to solve it. With the Law of Falling Bodies, the solution is: In 5 seconds a body falls 5^2 (25) units of distance. Which odd number is 25? The answer is: the 13th odd number. Therefore, the final answer is the 13th second. It is important to remember that by definition, one unit of distance is the distance fallen in the first second, which is numerically equal to one half the value of gravity.

Again, this physics application is for computers using Windows 10 or newer. This link will take you to one product (lecture) in TpT that explains in detail Galileo’s Law of Falling Bodies. It costs only $2.95. Physics Lecture: Galileo's Law of Falling Bodies by Ceres Science (teacherspayteachers.com)

For more information about many physics products created by Ceres Science and
available in TpT, please visit: