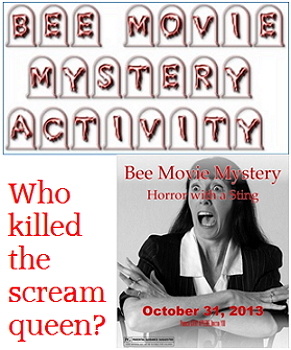 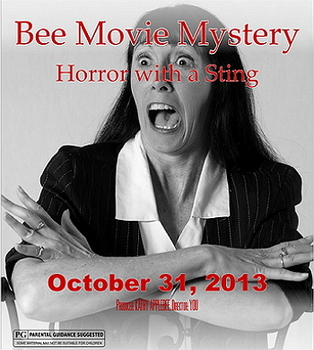 Put your detective skills and Halloween costume to work at the retirement party of Terry Silverwyn.

Bee Movie Studios (Horror with a Sting) has closed it doors. At the CEO’s farewell party, someone tries to do away with scream queen Gara Stellar who starred in many of the studio’s movies. Was it her ex-husband director? Bodyguard Bennie the Bulldog? Sister and lawyer Sadie? A crazed fan?

Participants are both suspects and detectives. (extras can be former actors, crew or fans of Bee Movies) Note: Some material may NOT be suitable for pre-teens.

Zip file contains .PDF and .DOC versions as well as some JPEG clues.

Mystery party activity/games are an engaging alternative to hum drum usual fare and make wonderful drama activities. Add spice to that theater class, family reunion, retreat or birthday/anniversary party. Acting experience and knowledge of police procedures are not necessary for a party no one will forget.

Kit includes character dossiers for 6-8 guests, a host pack with complete instructions for a hilarious party and a clues pack. Suggestions for menus, atmosphere and casting the roles make it easy for even a first-timer.

Extension activity links are included for students to create movie posters, newspaper articles or magazine covers about the activity. This is not a commercially produced box set. It is an original play tested mystery designed for experienced and novice players.

Check out additional mystery party activities such as:
To Kill a King freebie
Fairy Tale Mystery (Who kidnapped Cinderella?)
The Will murder mystery activity
Who Shot Prospector Pete?
Murder at the Manor

Who Killed Will Shakespeare? mystery activity
Chariots of Death freebie
Send in the Clones
The Toxic Ooze mystery