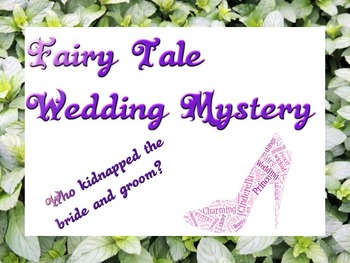 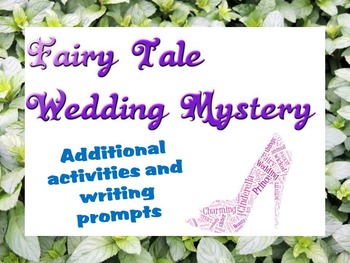 You are cordially invited to the Fairy Tale Wedding of Prince Charming and Cinderella. Oops! They've been kidnapped! Whodunit? Why?

Bring literature to life while writing your own ending to a highly interactive event that immerses students in literary terms and research first hand. After engaging in discussion and research into the fairy tale genre of literature, players take the roles of various fairy tale characters and function as both suspects and investigators to get to the bottom of this despicable crime. Following this event (perfect for kinesthetic learners, mixed ability groups and drama clubs or an end of school event that will make them ever so briefly wish they were in summer school)

Kit includes character dossiers for 14 primary suspects, (the rest of the class chooses their own characters), a host pack with complete instructions for a fun hands on event and the clues that will give your students hands experience using the scientific method.

A quick overview of plot and characters:
On the morning of their wedding Cinderella and Prince Charming are discovered missing. What happened and who did it? The suspects are:
Lady Tremain -the wicked step mother. Could she be determined to foul things up?
Step sister Anastasia - What would jealousy drive her to?
Step sister Drizella - Is there anything she doesn't whine about?
The Pied Piper -Was he hired to make mischief as well as music?
Captain Hook - Can a pirate ever be trusted?
The Jolly Green Giant -How is he managing after jack stole his bling?
The Big Bad Wolf - Is he a party animal or just an animal?
Rapunzel - Isn't she upset the prince dumped her for Cinderella?
Queen Maleficent She claims Snow White's poisoning was just a little accident.
The Wicked Fairy Godmother - Is she still upset over Sleeping Beauty.
The Troll - Where was he when things went down?
The Beast - Why isn't Beauty with him?
Rumplestiltskin - He always puts an interesting spin on the events.
The Witch - What is there to say?

Log in
to see state-specific standards (only available in the US).
CCSSRL.5.3
Compare and contrast two or more characters, settings, or events in a story or drama, drawing on specific details in the text (e.g., how characters interact).
CCSSRL.6.7
Compare and contrast the experience of reading a story, drama, or poem to listening to or viewing an audio, video, or live version of the text, including contrasting what they “see” and “hear” when reading the text to what they perceive when they listen or watch.
CCSSRL.7.7
Compare and contrast a written story, drama, or poem to its audio, filmed, staged, or multimedia version, analyzing the effects of techniques unique to each medium (e.g., lighting, sound, color, or camera focus and angles in a film).
CCSSRL.8.7
Analyze the extent to which a filmed or live production of a story or drama stays faithful to or departs from the text or script, evaluating the choices made by the director or actors.
CCSSRL.9-10.7
Analyze the representation of a subject or a key scene in two different artistic mediums, including what is emphasized or absent in each treatment (e.g., Auden’s “Musée des Beaux Arts” and Breughel’s Landscape with the Fall of Icarus).