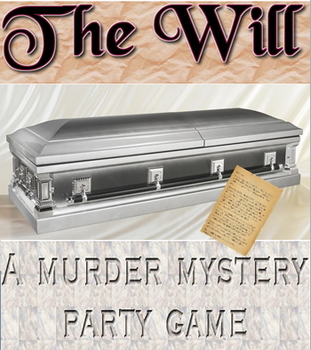 THE WILL MURDER MYSTERY ACTIVITY

When rich old Mrs. Wetherington dies the family and staff are shocked, not at her death (after all she was old and many people wanted her dead) but at her will. The bulk of the estate would go to the person who fingered her murderer. Skeletons in closets, blackmail and underhanded dealings all abound at the family estate as everyone points fingers and declares their innocence.

Mystery activities are an engaging alternative to hum drum get togethers, typical drama club exercises and office parties. Acting experience and knowledge of police procedures are not necessary for a party no one will forget.

Kit includes character dossiers for 6-10 guests, a host pack with complete instructions for a hilarious party and a clues pack. Suggestions for menus, atmosphere and casting the roles make it easy for even a first-timer. This is not a commercially produced box set. It is an original play tested mystery designed for experienced and novice players.

Who Assassinated JFK?
The Case of the Lifeless Lifeguard
Jake's Dead: Who Is in the Will? freebie