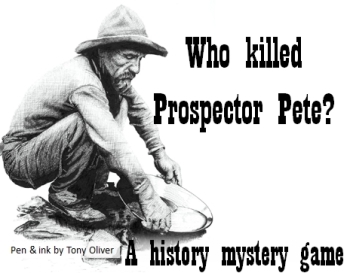 Prospector Pete is found shot in the back at his mining claim with a peck of people possibly involved including his wife Betsy, the Raindance Kid, Hoss Steel, Lily Lang Tree (or is it Land Tree?) and many more. Jump right in as a suspect and a detective and figure out who did it.

Mystery party games are an engaging alternative to hum drum usual fare and make wonderful drama activities. Add spice to that theater class, family reunion, retreat or birthday/anniversary party. Acting experience and knowledge of police procedures are not necessary for a party no one will forget.

Kit includes character dossiers for 6-11 guests, a host pack with complete instructions for a hilarious party and the clues. Suggestions for snacks or a dinner menu, atmosphere and casting the roles make it easy for even a first-timer.

Murder at the Manor
Who Killed Will Shakespeare? mystery activity
Chariots of Death freebie