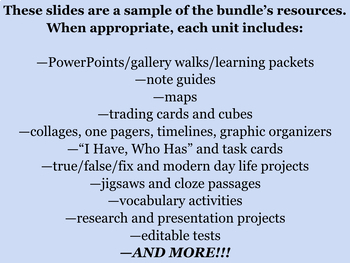 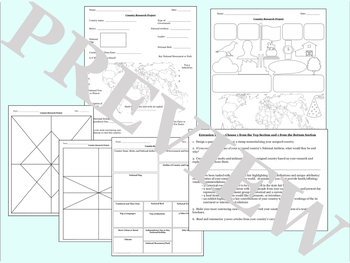 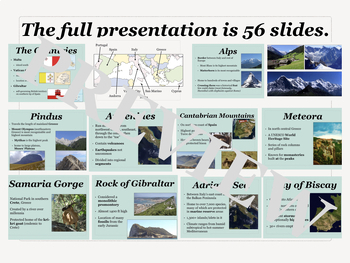 World Geography students review a variety of geography topics and concepts with 100+ activities covering landforms, the 5 themes of geography, maps and landmarks, European physical geography, Asian physical geography and modern day, Russia's physical geography, the Amazon river, Mesopotamia, East Asia, East Africa, South Asia, country reports, create a country, academic cumulative reviews, and more! There are anticipation guides, gallery walks, a GRAPES reference sheet and project, task cards, "I have who has" review games, and activities to compare and contrast Mexico and Brazil, China and Japan, Italy and Greece, France and Germany, and the United States and Canada and more!!!. Many of these would be great for a sub! Answer keys, rubrics, or points distributions are included where appropriate. See the preview for a closer look!

***I anticipate adding more resources to this as the year progresses.***

To recap this bundle includes:

Physical Geography Overview for ANY Country

Around the World End of Year Project

Physical Geography/Regions/Countries "I Have, Who Has" BUNDLE

Different Perspectives of the World via Maps

7 Wonders of the World BUNDLE

4 Anticipation Guides (Greece and Italy, China and Japan, Great Britain and the Netherlands, Mexico and Brazil)

The Influence of Physical Geography on a Civilization Creative Activity

Total Pages
1000+
Answer Key
Included with rubric
Teaching Duration
N/A
Report this Resource to TpT
Reported resources will be reviewed by our team. Report this resource to let us know if this resource violates TpT’s content guidelines.