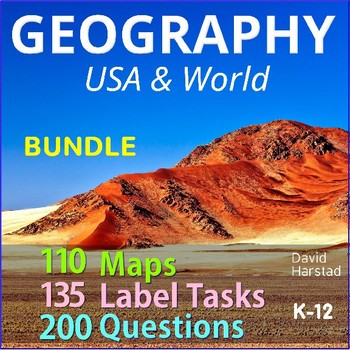 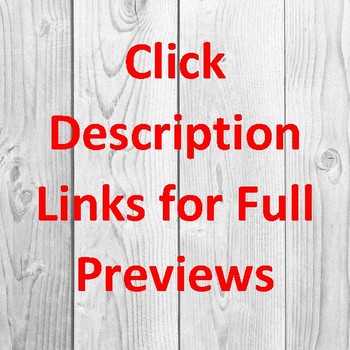 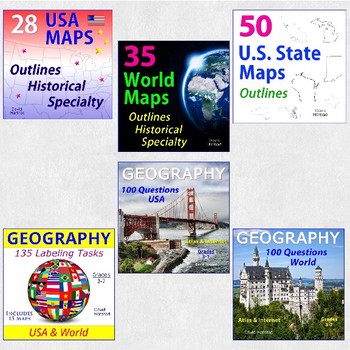 Help the pilot navigate, while narrating scenic features over the intercom with your career-long geography bundle. Spatial learning abounds with basic locations of states, countries, and cities. Teach search techniques with questions and transfer information with labeling.

Maps are zipped in PDF. Resize maps or outline in Sharpie for any clarity issues. Maps are sold "as is" and compiled from various online sources presented as free for public use, CC0, or without known copyrights.

This bundle is a compilation of the following listings. Click links for full previews.

with the following details...

• United States of America (borders only)

• United States of America (no states)

• Aldrin on the moon.

1. What are the capitals of West Virginia and Maryland?

2. Which state is larger: Kansas or Kentucky?

4. Which river borders both Oregon and Washington?

6. Which states would you cross walking directly from Pierre, SD to Sacramento, CA?

10. What states border the Gulf of Mexico?

16. Name the four states that meet at one point.

18. What are the capitals of Nevada and Arizona?

19. Which is closer to Detroit, MI: South Dakota or Arkansas?

25. How far is it from San Francisco, CA to Los Angeles, CA?

27. Which Great Lake is the largest?

29. What are the capitals of New Hampshire and Ohio?

31. A panhandle is a piece of land that extends out from the main body. Idaho is a “panhandle” state. Name two other states that have a panhandle.

32. What is the distance from Las Vegas, NV to Denver, CO?

35. Which state is smaller: Connecticut or Delaware?

37. What are the state capitals of New Mexico and Kansas?

38. Is the capital of Hawaii on its largest island?

39. What is interesting about Alaska’s capital? Why do you think it is in this location?

40. How far is it from Albany, NY to Philadelphia, PA?

42. What are the capitals of North Carolina and Wyoming?

45. Which state is larger: Colorado or Pennsylvania?

46. What river borders Oklahoma and Texas?

47. If you traveled directly from Pierre, SD to Miami, FL, what states would you cross?

48. What states border the Great Lakes?

49. Which city is farther north: Tallahassee, FL or Mobile, AL?

52. The Mississippi River starts in Minnesota and empties into the Gulf of Mexico. List the states that border the river.

62. Find a state capital whose name has more letters than Idaho’s capital.

64. Is Illinois east or west of Kansas?

66. What states lie between Texas and North Dakota?

67. What states border Mississippi and Vermont?

69. Which state is closer to Iowa: Delaware or New Mexico?

71. What are the capitals of Louisiana and Michigan?

72. If a plane flew directly from Santa Fe, NM to Concord, NH, which states would it cross?

73. How many states border Kentucky?

75. Which is closer to Maryland: Texas or North Dakota?

77. Is Connecticut closer to Montana or Colorado?

78. What states are directly between Rhode Island and Delaware?

81. What states border the Colorado River?

84. What states are crossed flying directly from Lansing, MI to Baltimore, MD?

87. Name three port cities on the Gulf of Mexico.

88. Is Lincoln, NE closer to the Atlantic or Pacific Ocean?

91. How far is it from Portland, OR to Birmingham, AL?

93. What are the capitals of Oregon and Connecticut?

95. What states border both Kansas and Arkansas?

96. Name the mountain range in both Oregon and Washington.

97. How far is it across Washington state?

1. What are the capitals of Brazil and Libya?

2. Which country is larger: Kenya or Syria?

6. Which countries would you cross walking directly from Rome, Italy to Poland?

10. What countries border the Paraguay?

11. What is the next closest capital to Lusaka, Zambia?

12. Which is closer to the Equator: Mongolia or Greece?

18. What are the capitals of Canada and Vietnam?

19. Where does the Nile River end?

29. What are the capitals of Bolivia and South Korea?

31. Describe the location of the Andes mountains. (3 sentences)

32. What is the distance from Madrid, Spain to Moscow, Russia?

35. Which country is smaller: Mauritania or North Korea?

37. What are the capitals of Liberia and Indonesia?

38. Is the capital of Japan on its largest island?

42. What are the capitals of Australia and Turkey?

45. Name three countries on the Tropic of Cancer?

46. What mountains border France and Spain?

47. If you traveled directly from Calcutta, India to Athens, Greece, what countries would you cross?

52. The Mediterranean Sea has long been important in trading goods between Africa, Asia, and Europe. Name six countries bordering the sea.

56. List three countries in South America north of the Tropic of Capricorn.

57. Which country is closer to the International Date Line: Belize or Panama.

59. How far is it from Berlin, Germany to London, United Kingdom?

60. After Canada and Mexico, what are the third and fourth nearest countries to the United States?

61. Describe the location of the Atlas Mountains (2 sentences).

62. Find a country capital whose name has more letters than Lithuania’s capital.

69. Which country is closer to Iceland: Canada or Finland?

70. How far is it from Lisbon, Portugal to Jerusalem, Israel?

71. What are the capitals of Jamaica and Chile?

72. If a plane flew directly between the capitals of Ecuador and Paraguay, which countries would it cross?

75. Which is closer to Madagascar: Sweden or Kazakhstan?

77. How far is it across Australia?

80. What mountain range divides Russia into Asia and Europe.

81. What countries are between Senegal and Liberia?

82. How far is it from Sao Paulo, Brazil to Cape Town, South Africa?

84. What countries are crossed flying directly from Montreal, Canada to Managua, Nicaragua?

86. List these countries from north to south: The Bahamas, Grenada, USA, Haiti.

89. How far is it from Stockholm, Sweden to Reykjavik, Iceland?

91. How far is it from Moldova’s capital to Austria’s capital?

93. What are the capitals of Venezuela and New Zealand?

95. What country is smaller: Liechtenstein or Monaco?

97. What is the longest distance across Iceland?

98. What direction does the Amazon River flow?

5. Outline each state a different color, so that no two same colors are touching.

6. State boundaries were usually decided by a mathematical line or natural boundaries, like mountain ranges or rivers. List three states that contain both line and natural borders.

7. State capitals are not always the largest city. Many states chose smaller cities for their capital to reduce the influence big cities would have over state decisions. List three small-city capitals.

8. What is the second most northern state after Alaska? (Hint: It is not Maine.)

9. The flag should never be used as a drape, towel, tablecloth, sheet, or clothing. Instead, use bunting as a patriotic decoration. What are three different occasions bunting would be an appropriate decoration?

10. A United States flag is provided, at no cost, to families of deceased veterans for memorial services. The purpose is to honor the memory of a veteran’s military service to his or her country. The request form and flags are available at your local post office. How does a memorial flag from the United States show respect to the veteran?

10. How long is the Mississippi River?

9. Great Basin (“water having no connection to the ocean”)

9. Use the Forest symbol to show Maine is a heavily forested state (83%).

1. Label 30 countries and outline all countries in different colors

1. Label 25 countries and outline all countries in different colors

1. Label 30 countries and outline all countries in different colors

1. Label 20 countries and outline all countries in alternating colors.

3. Label your school and Washington, D.C.

1. Label all countries and outline in different colors

3. Label one large city in each country

Those on the left side of the plane will notice...

Return to The Harstad Collection.