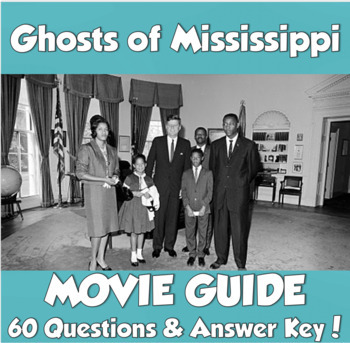 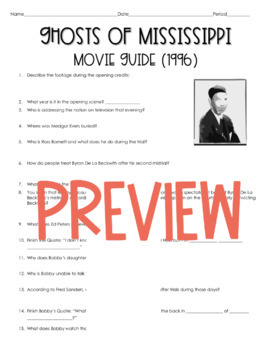 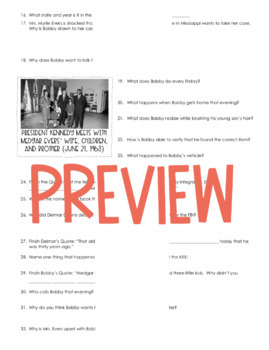 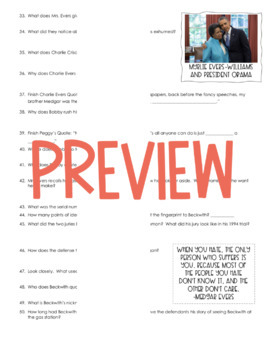 Ghosts of Mississippi is based off of the true story of Medgar Evers’ killer being brought to justice over 30 years after the hate crime. Medgar Evers was an influential Civil Rights leader gunned down in his own driveway by white supremacist, Byron de la Beckwith. Beckwith was tried twice in 1964 by all white male juries with both cases ending in mistrials. It follows Mrs. Evers and D.A. Bobby DeLaughter’s long battle in the divided state of Mississippi to bring him to trial and have justice served. The film stars Alec Baldwin, Whoopi Goldberg, James Woods, Craig T. Nelson, Bill Cobbs, James Pickens Jr., and William H. Macy. This film would be beneficial for Black History Month, U.S. History, Law & Justice, or a Government course. This could also be used for a last minute lesson or sub plans.

My video guide contains 60 questions and an answer key has been provided for your convenience. The film's runtime is 130 minutes and is rated PG-13 for a strong scene of violence and for racial dialogue.

By purchasing this item, you agree to use it for your classroom use only and will not share with others, claim as your own, or post online. Additional licenses are available for a reduced price.

The Help- Set during 1963, a young white author is inspired to write about African American women and their work as the caretakers and housekeepers for white families in Jackson, Mississippi.

Lee Daniels' The Butler- A man, Cecil Gaines, serves as a White House butler during seven administrations and has a front row seat to history.

Kevin Hart's Guide to Black History Month- The documentary tells the stories of individuals that many may not be aware of when it comes to African American advancements and innovations and also shares the stories of some well-known figures.