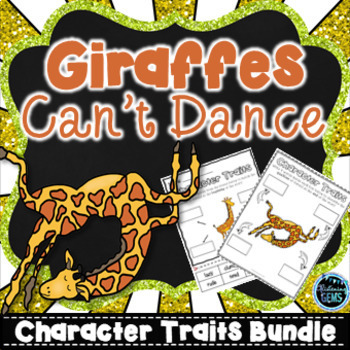 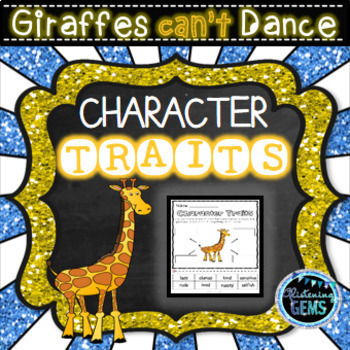 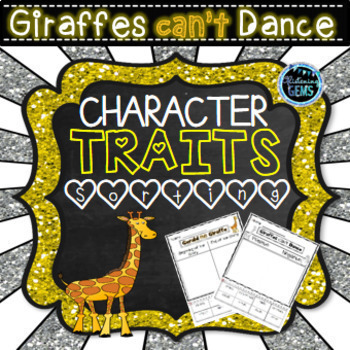 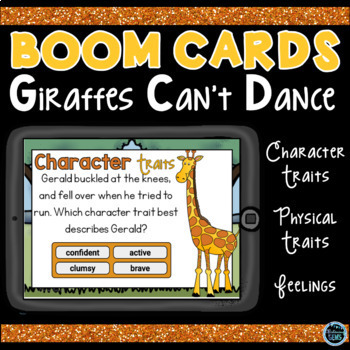 The pack entails the following activities for the popular story, 'Gerald the Giraffe':

♥ Cut and paste worksheets - students cut and paste the qualities, feelings and physical traits of Gerald the giraffe at the beginning and end of the story.

♥ Write character traits- students write their own qualities and physical traits to describe Gerald. There are also worksheets for students to write the qualities of the other animals in the story.

♥ Who am I Activities - students write 3 character traits clues to describe Gerald at the beginning of the story and the end of the story.

♥ Wanted Posters- students create wanted posters for characters, and say what they are wanted for. They will describe the character's physical traits in the description boxes,

♥ Roll a Die Activity and character trait graphic organizers - students will roll a die and find evidence in the text to match the character trait rolled for Gerald the giraffe and the other animals. An example sheet is provided to model to the class.

Included in this bundle are printable task cards and digital Boom Cards. These task cards are designed for first grade to third grade to provide your students with practice with identifying character traits, feelings and physical traits of characters in the story, "Giraffes Can't Dance". These multiple choice questions will allow your students to make inferences about characters.

Note: The task cards and Boom Cards have the same questions, but a different format.

Devices that can be used for Boom Cards:

This pack includes two sets of the following printables in color and black and white:

• Cut and paste sorting worksheet – sort Gerald’s character traits into beginning of the story and end of the story.

• Worksheet - students list their own character traits about Gerald at the beginning of the story and the end of the story. They also write a sentence about Gerald’s best quality.

• Cut and paste sorting worksheet – sort the character traits into positive and negative. The positive traits were displayed by Gerald and the negative traits were by the other animals in the story.

• Cut and paste sorting worksheet – sort the cricket’s traits into appearance and qualities.

• Cut and paste sorting worksheets – sort the words into synonyms and antonyms for the words: proud and brave.

Character Traits Yes/No Game - Is a fun and interactive game, that will assist your students to make inferences about characters, expand their vocabulary and consolidate their understanding of character traits.

Boom Cards - Giraffes Can't Dance Digital task cards are a fun and interactive way for your students to identify character traits of characters in the story. Included in this deck are 20 Boom Cards! Giraffes Can't Dance Boom deck is so easy to use, and students can self-check their answers as they go! This paperless activity is perfect for distance learning for students, or for parents to use with their children whilst learning at home!

• 20 colored Boom Cards hosted on the site Boom Learning - On each task card includes a sentence about a character/characters in the story. Students need to infer whether the character/characters displayed that particular character trait or not by clicking on the yes or no button.

This bundle is also included in the money saving bundles below:

Total Pages
118 pages & 40 slides in Boom Cards
Answer Key
Included
Teaching Duration
N/A
Report this Resource to TpT
Reported resources will be reviewed by our team. Report this resource to let us know if this resource violates TpT’s content guidelines.