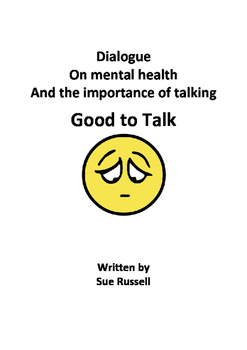 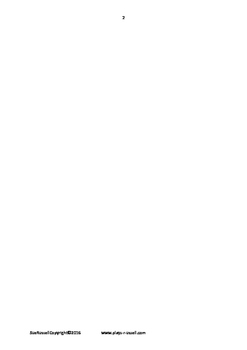 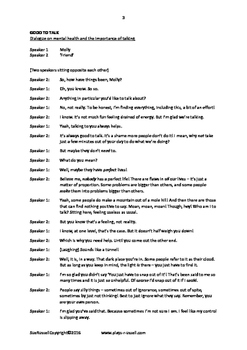 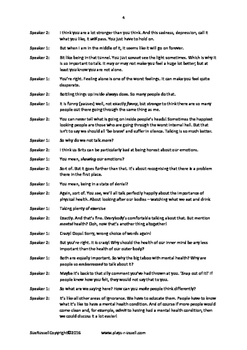 Good to Talk - Two Speaker Script
Dialogue on mental health and the importance of talking - Time to Talk Day - this Thursday February 4th - this is a joint initiative - run by MIND and Rethink - addressing the taboo around mental health as people still tend to feel uncomfortable talking about it.
2 speakers – I have named Speaker 1 Molly; but not given a name or ‘status’ to Speaker 2 as Molly’s ‘friend’ in this situation could be a teacher, a counsellor or ‘an independent helper’.
My strong feelings on this subject prompted me to write two scripts - the first for younger children on 'Feeling Sad' - the language very simple as was the message - emphasizing that sadness is part of life, something we should all talk about and not feel embarrassed about; and the second (this one) for older children/young adults.
2 speakers – suggested age 12+
Duration – around 5 minutes reading time. This script could be used as a starting point for discussion of various issues raised.
Sample Text
Speaker 1: .......Though, hey! Who am I to talk? Sitting here, feeling useless as usual.
Speaker 2: But you know that’s a feeling, not reality.
Speaker 1: I know, at one level, that’s the case. But it doesn’t half weigh you down!
Speaker 2: Which is why you need help. Until you come out the other end.
Speaker 1: (Laughing) Sounds like a tunnel!
Speaker 2: Well, it is, in a way. That dark place you’re in. Some people refer to it as their cloud. But as long as you keep in mind, the light is there – you just have to find it.
Speaker 1: I’m so glad you didn’t say ‘You just have to snap out of it’! That’s been said to me so many times and it is just so unhelpful. Of course I’d snap out of it if I could.
Speaker 2: People say silly things – sometimes out of ignorance, sometimes out of spite, sometimes by just not thinking! Best to just ignore what they say. Remember, you are your own person.
Speaker 1: I’m glad you’ve said that. Because sometimes I’m not sure I am. I feel like my control is slipping away.
Speaker 2: I think you are a lot stronger than you think. And this sadness, depression, call it what you like, it will pass. You just have to hold on.
Speaker 1: But when I am in the middle of it, it seems like it will go on forever.
Speaker 2: Bit like being in that tunnel. You just cannot see the light sometimes. Which is why it is so important to talk. It may or may not make you feel a huge lot better; but at least you know you are not alone.
Speaker 1: You’re right. Feeling alone is one of the worst feelings. It can make you feel quite desperate.
Speaker 2: Bottling things up inside always does. So many people do that.
Speaker 1: It is funny (pauses) well, not exactly funny, but strange to think there are so many people out there going through the same thing as me.
Speaker 2: You can never tell what is going on inside people’s heads! Sometimes the happiest looking people are those who are going through the worst internal hell. But that isn’t to say we should all ‘be brave’ and suffer in silence. Talking is so much better.
Speaker 1: So why do we not talk more?
Also available from www.plays-r-ussell.com:

30 speaker script for primary school children: Feeling Sad Assembly – which is available in
PSHE section which has the following scripts:

• You are Not Alone – Anti-Bullying Assembly
• P.R.I.D.E. Assembly and Guided Reading Scripts - I have used these to cover many events e.g. World Cup (football and rugby), Olympics etc. The following description is taken from the website: This Class Play, inspired by The Celtics basketball team, in Boston - featuring 17 basketball players, 1 coach, 3 fans, 3 dancers plus mascot - sets out to demonstrate the importance of P.R.I.D.E. - an acronym for Positive attitude; Respect for yourself and others; the ability to make Intelligent decisions; time to Dream; and not forgetting all the Effort that needs to be put in - in all walks of life. The sport (basketball) can be easily replaced by another e.g. football, ice hockey, ... with a few adjustments to the text. This Class Play provides the perfect way of demonstrating what it takes to make it in life - the kind of success story all children can aspire to.
• Rock Star – about self-esteem and based on Hannah Montana
• Happy to be me Assembly
• Character Assembly – What it Takes To Be Good
• If – Rudyard Kipling Assembly
• British Values Assembly
• Monsters Assembly
• Children of the World Assembly
• Dance Around the World Assembly
• A set of PSHE scripts based on fairy stories – Cinderella, Sleeping Beauty (alternative versions) – which deal with certain themes – serious subjects but handled with sensitivity and humour.

These assemblies can be found on the website www.plays-r-ussell.com by clicking on Catalogue (left hand panel), then Assemblies, then PSHE (under subjects) – same for Guided Reading scripts only starting with G.R. scripts instead of Assemblies.