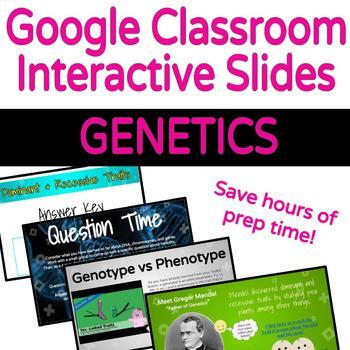 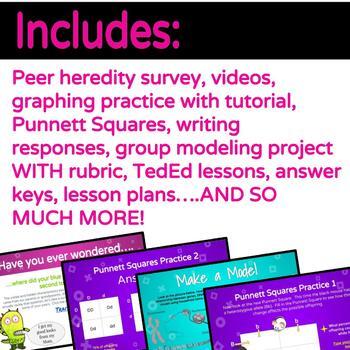 Christi Moore Resources
346 Followers
Follow
Made for Google Drive™
This resource can be used by students on Google Drive or Google Classroom. To access this resource, you’ll need to allow TpT to add it to your Google Drive. See our FAQ and Privacy Policy for more information.
DescriptionReviews23Q&A

What's Cookin' Good Lookin'? This Google Classroom resource is a perfect way to incorporate technology and peer interaction as students learn about how genetics gave them their good looks. This resource is also great for remote or distance learning!

-Editable “Traits Survey” for students to collect data from their peers

-Video and description of genes, DNA, and chromosomes

This product includes a teacher version, which includes lesson plans and all the answer keys, and a student version of the interactive slides.

In this lesson, students will:

-Take genetic data (traits survey) from a population, graph that data, and interpret their graphs

-Learn the difference between genotypes and phenotypes

-Understand how sex-linked traits are inherited

-Describe the difference between genes, chromosomes and DNA using a 3D model

-Formulate a question about the relationship between genes, DNA, and chromosomes and consider how that question may be answered through modeling or experimentation

All cells contain genetic information in the form of DNA molecules. Genes are regions in the DNA that contain the instructions that code for the formation of proteins. (secondary) (Note: This Disciplinary Core Idea is also addressed by HS-LS1-1.)

Each chromosome consists of a single very long DNA molecule, and each gene on the chromosome is a particular segment of that DNA. The instructions for forming species’ characteristics are carried in DNA. All cells in an organism have the same genetic content, but the genes used (expressed) by the cell may be regulated in different ways. Not all DNA codes for a protein; some segments of DNA are involved in regulatory or structural functions, and some have no as-yet known function.

In sexual reproduction, chromosomes can sometimes swap sections during the process of meiosis (cell division), thereby creating new genetic combinations and thus more genetic variation. Although DNA replication is tightly regulated and remarkably accurate, errors do occur and result in mutations, which are also a source of genetic variation. Environmental factors can also cause mutations in genes, and viable mutations are inherited. (HS-LS3-2)

Like this product? You may want to check out more interactive slides while you’re at it!

Like this product? Check out these AWESOME Digital Interactive Google Slides:

Ain't Nobody Got Time to Graph

Deck the Halls with Data Tables