Grammar Games Bundle Got it 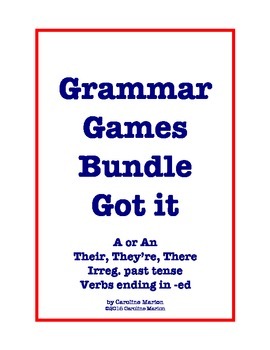 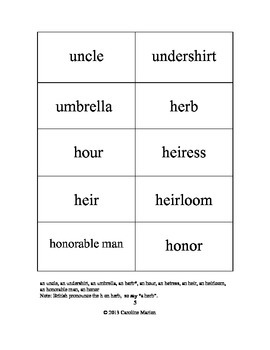 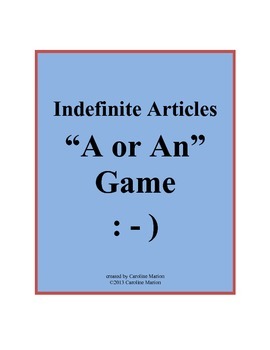 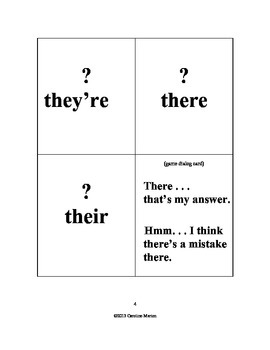 I Speak Your Language

443 Followers
Follow
More products from I Speak Your Language
$9.60
Bundle
List Price:
$12.00
You Save:
$2.40
Report this resource to TpT
Products in this Bundle (4)
Bundle Description

Student worksheet (which repeats the sentences used in the game) included for written work after the game. Game sentences hold answer key for worksheet.

This game is similar to the one above.

Time: About 30 minutes –depends on class size (# of times sentences are repeated)

Do your students suffer from “A or An” confusion? A unicorn but an uncle? A house but an hour? An R.N., an M.D., a DVD. . . End the confusion with this card game for two to five players.

Shuffle up the 59 word cards and deal them out, giving 8 cards to each player. Place the two category cards (a ?, an ?) in the middle of the table. Each player reads his word to the group and then tries to place it under the correct article card, “a or an”, repeating the article and the noun. The rest of the players must tell him if it is correct or not before play passes to the next player. If correct, players signal with a “thumbs up” gesture. If it’s wrong, players signal with a “thumbs down” gesture and whisper or say quietly: “I think that’s an error.” Then the player or players who gestured “thumbs down” must explain what the correct answer should be. If determined that the answer is indeed incorrect, the player must take the card back. To win, a player must rid his hand of all cards.

Drill, review or test with these game cards. In the game, players respond with a handclap or "Hmm. . .I think there's a mistake there."

Practice the dialog with students first, using expression and intonation. Remind them that this dialog uses "there" in two ways. “There . . . that’s my answer.” (a place –Where? –There.) “Hmm. . .I think there’s a mistake there.” ("there" referring to the existence of a mistake and "there" referring to where). Make sure students are clapping once to indicate a correct answer. Students can take their time clapping or responding. This helps keep every player engaged. Every player must give a response before play continues to the next player. To win a player must rid his hand of all cards. If a mistake is made, he takes his card back.

The second time your students play this game, have them create a few of their own sentences (in pencil) on the blank card forms to add to the game cards.

Total Pages
38 pages
Answer Key
Included
Teaching Duration
90 minutes
Report this Resource to TpT
Reported resources will be reviewed by our team. Report this resource to let us know if this resource violates TpT’s content guidelines.