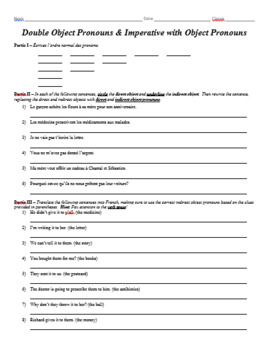 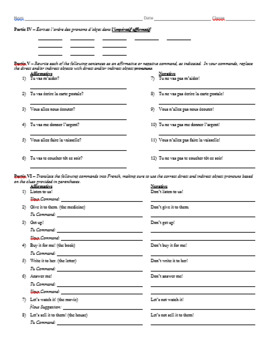 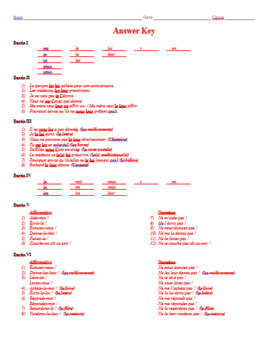 The first three sections focus on the placement and order of pronouns when more than one object pronoun is used in an indicative sentence, including rewriting and translating sentences into French, replacing direct and indirect objects with pronouns. The practice includes the placement of multiple object pronouns in simple structures (present tense), compound structures (passé composé), and conjugated verb + infinitive structures.

The final three sections focus on the placement and order of single and double object pronouns in both affirmative and negative commands, including transforming questions into commands and translating commands from English to French. The practice includes both formal and informal commands (tu and vous), as well as suggestions using the nous form.

Note: For users of the Bon Voyage level 2 textbook, this corresponds very well with Chapter 6 Structure, combining aspects of Chapters 1 and 2. It also works well with Chapters 2-3 of Bien Dit 2 and can work well with any other lesson on both direct and indirect object pronouns. In fact, it is a Word document that can easily be edited and adapted to any French textbook or curriculum.