Great Depression and the New Deal Lessons and Activities 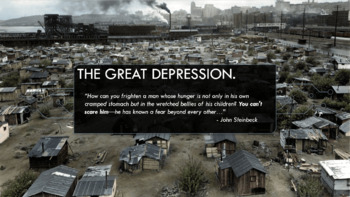 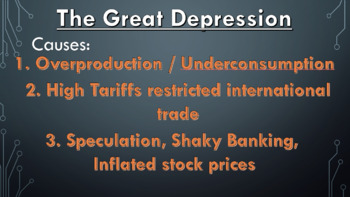 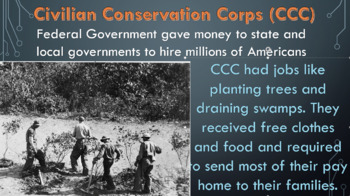 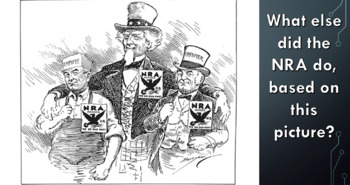 Engaging, thorough, and visual PowerPoint. FIlled with information and primary pictures, documents, memes (for laughs) and graphs to look at. Most slides have multiple layers of information so slide count is not representative of total.

The first half of this PowerPoint has information, questions and activities related to the Great Depression. It covers the causes and goes into detail about them.

An unemployment graph is used to show not only when the Depression started, but also when Demobilization happened after WW1 as a review.

It discusses the split between Democrats and Republicans about how to deal with the Depression, and there is a meme about how Herbert Hoover had bad luck to be elected right before the Depression hits. Gets chuckles every time.

Also, a lot of primary photographs to look at about Hoovervilles. A little bit about the Hoover Dam. Discusses the Bonus Expeditionary force and segues into the election of FDR.

A brief biography of FDR and why he won the election, and why he was mostly a popular President.

Also discusses criticisms of FDR and his policies after giving thorough details and information of the New Deal.

Discusses all of the major aspects of the New Deal (SEC, FDIC, CCC, NRA, etc.), and why he worked to implement them. Talks about the issues with the Supreme Court and his court-packing idea, and how that flopped.

With all of the images, it is easy to spark discussion and dialogue with students about the images. There are some explicit think-pair-share slides, but you can always edit and add more.

Slide also describes Social Security Act, and the other legacies of the New Deal.

There are extra political cartoons toward the end to use for team analysis.

Last 2 slides go over the popular culture that came out around this time.

I use a couple of Steinbeck quotes from the Grapes of Wrath to illustrate popular sentiment toward financial institutions and the 'system'.

Last slide is about Dorothea Lange and her work.

Let me know what you think! I used this PowerPoint for 2 weeks!