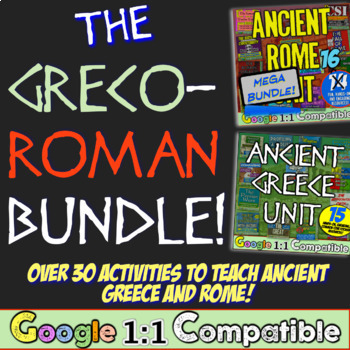 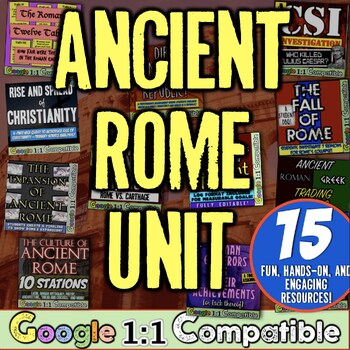 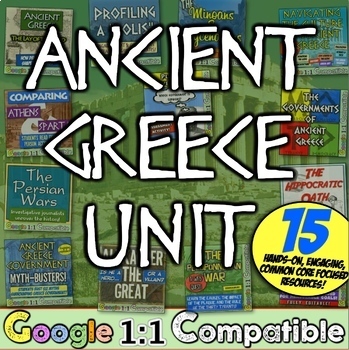 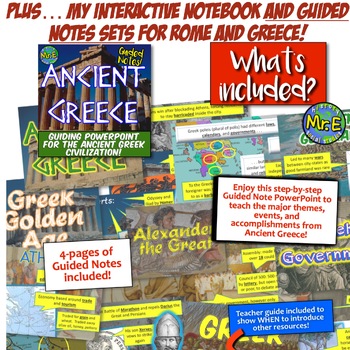 In the Greco-Roman Unit Bundle, the Ancient Greece Unit and the Ancient Rome Unit! from History with Mr E are combined to save you money!

The 31 resources included in the Greco-Roman Bundle are:

✔ 2.) The Earliest Ancient Greeks: Analyzing the Minoans and Mycenaeans!

✔ 4.) The Governments of Ancient Greece: Monarchy, Oligarchy, Tyranny and Democracy!

✔ 8.) A bonus lesson where students create a recruitment poster to convince other Greeks to join either Athens or Sparta!

✔ 11.) Alexander the Great: A Hero or a Villain? A common-core ready investigation!

✔ 13.) Plato, Ancient Greece, and Government: Which Government is best for Greece?

✔ 14.) Ancient Greece Test! 38 questions to accompany the unit from History with Mr E!

✔ 15.) Ancient Greece "I Can" statements and Learning Goal Log! Students track and measure their own learning! Very focused and holds students accountable!

✔ 9.) Christianity in Ancient Rome: The Rise and Spread! A Student Exploration!

✔ 14.) - Ancient Rome "I Can" statements and learning goal log where students track and measure their own learning! Very focused and holds students accountable!

✔ 15.) The Expansion of the Roman Republic! Timelining the growth of Ancient Rome!

✔ 16.) Gladiators and their Games! Life as a Gladiator in Ancient Rome! Fun & Engaging!

✩✩ Check out the preview for a special offer on the CSI Lost City of Atlantis resource! ✩✩

Total Pages
439 pages
Answer Key
Included
Teaching Duration
3 months
Report this Resource to TpT
Reported resources will be reviewed by our team. Report this resource to let us know if this resource violates TpT’s content guidelines.