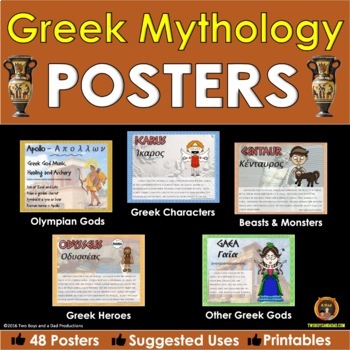 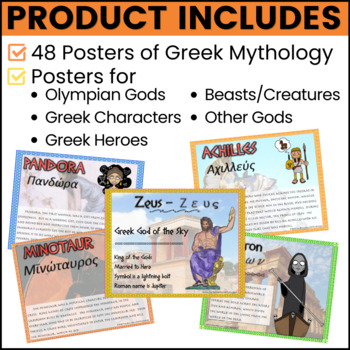 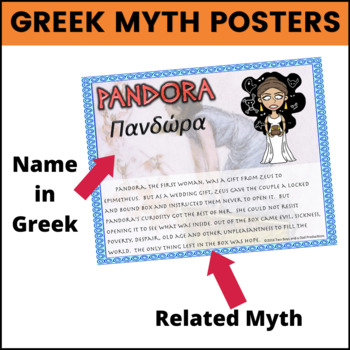 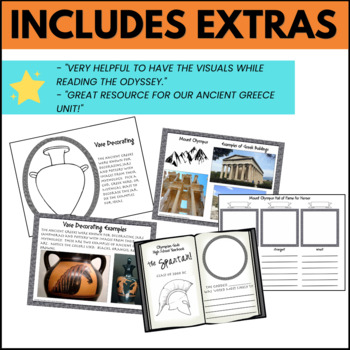 Two Boys and a Dad Productions
2k Followers
Follow
Compatible with Easel Activities
This resource is compatible with Easel by TpT, a suite of digital tools you can use to make any lesson interactive and device-ready. Customize this activity and assign it to students, all from Easel. Easel is free to use! Learn more.
DescriptionReviews13Q&A

Use these Greek mythology posters to learn about the different Greek gods, mythological characters, beasts, and creatures and the Greek heroes. Display these 48 posters as a resource for students to learn and identify characters from the Greek myths. Use them in conjunction with a literature unit on Greek Myths or a Social Studies unit on Ancient Greece.

What’s Included
48 Posters in 5 sets (suggestions for use included)
Each of the Posters has the English and Greek spelling of the god or character.


How They Can Be Used

Olympian Gods posters contain information as to which domain the god or goddesses presides over, as well as, as a picture and the Roman name equivalent.

The Characters from Greek Myths posters include a picture and a synopsis of the myth surrounding the character. There is also a background image that displays a statue or other artwork depicting the character.

The Mythical Beasts and Creatures posters include an image and a synopsis of who or what the creature or beast is. There is also a background picture that displays a statue or other artwork depicting the character.

The Greek Heroes posters include an image and a synopsis of why the character is considered a hero. There is also a background picture that displays a statue or other artwork depicting the character.

The Other Greek Gods posters include an image and a synopsis of why the god or goddess is famous in Greek mythology. There is also a background picture that displays a statue or other artwork depicting the character.

Suggestions included for how to use each set of posters.

♦ Do you need some fresh ideas and tips? Then visit My BLOG

Each time you give feedback, TPT gives you feedback credits that you use to lower the cost of your future purchases. I value your feedback greatly!