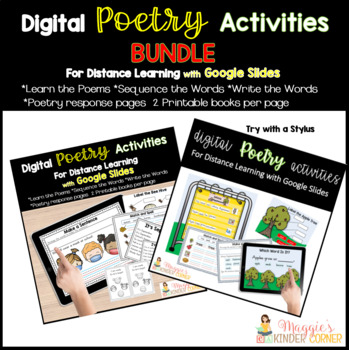 This set is for use with google classroom, and includes 6 poems:

Included in the Digital Classroom Activities:

Identification of key words and writing practice for each

Included in the Printable set:

A printable book for each poem, including wearing a mask in the I'm at School booklet

Save on the deeply discounted bundle! Some elements of the poems are included in the Johnny Appleseed Digital Poetry set, so you are not charged for this. :)

This is a GROWING Bundle, so you can buy it at the current price, and have the rest of the months of the year's sets free! Planned additions will have 32 pages each, so this means an additional 352 slides.

The following are registered trademarks, and are not sponsors, nor have they endorsed products by Maggie's Kinder.