Guess What? Decimals: Plays Just Like Guess Who (Even Fits Game Trays!) 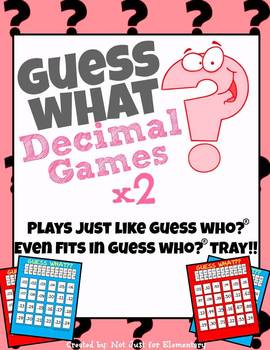 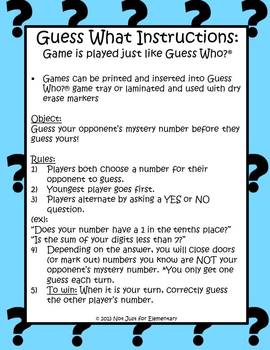 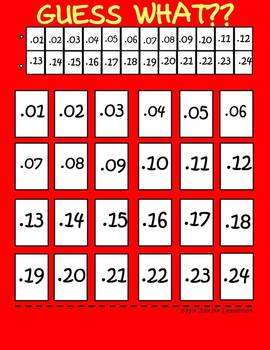 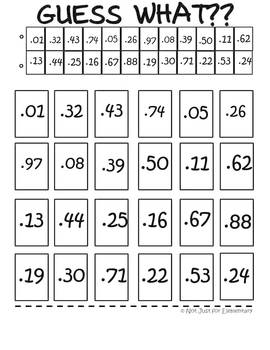 Fun's Not Just for Elementary

This is one of my student's favorite warm-up and math center games! It is played exactly like Guess Who?, instead students are guessing their opponent's decimals.

Best feature: template fits perfectly into Guess Who? game trays!!
*If you don't have the game, that's okay too. Just print and put inside sheet protectors (or laminate) and students can mark out boxes with dry erase markers!

Object:
Guess your opponent’s mystery number before they guess yours!

Rules:
1) Players both choose a number for their opponent to guess.
2) Youngest player goes first.
3) Players alternate by asking a YES or NO question.
(ex): “Does your number have a 1 in the tenths place?”
“Is the sum of your digits less than 7?”
*You can make the rule that same question can't be asked by both players during a game.
4) Depending on the answer, you will close doors (or mark out) numbers you know are NOT your opponent’s mystery number. *You only get one guess each turn.
5) To win: When it is your turn, correctly guess the other player’s number!

I hope your kiddos love this game as much as mine do!
~Not Just for Elementary (learning can be fun for big kids too!)
www.notjustforelementary.blogspot.com


Decimals Guess What by Not Just for Elementary is licensed under a Creative Commons Attribution-NonCommercial-NoDerivs 3.0 Unported License.
Total Pages
8 pages
Answer Key
N/A
Teaching Duration
N/A
Report this Resource to TpT
Reported resources will be reviewed by our team. Report this resource to let us know if this resource violates TpT’s content guidelines.