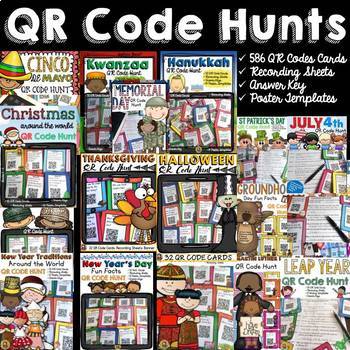 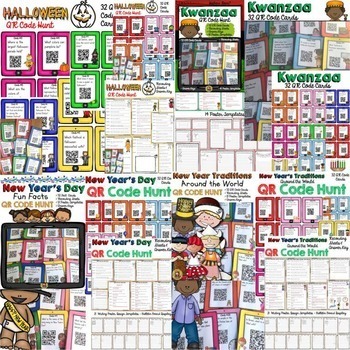 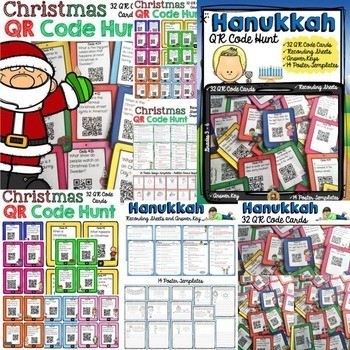 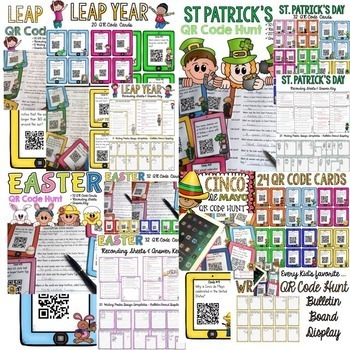 Teach2Tell
9.3k Followers
Compatible with Digital Devices
The Teacher-Author has indicated that this resource can be used for device-based learning.

*BANNERS included for all celebrations.

See the option to use fact cards instead of QR Code Cards here:

Invest in this MEGA QR Code Hunts bundle comprising of 586 QR Code Cards, Recording Sheets, and Answer Keys. Your students will be intrigued and fascinated to learn about how major holidays are celebrated around the world, moreover this resource will empower students with knowledge and understanding of worldwide cultures and traditions. Read reviews of each individual Hunt to see how much fun kids have had on their QR Code Hunts.

♦ This bundle features 20 QR Code Hunts, all related to seasonal/holiday themes. The list price of the 20 independent QR Code Hunts included in this bundle amount to $94. Buy now to save 50% off the combined cost of individual hunts.

The QR Code Hunts currently included in this bundle are:

ACTIVITY FOR EACH QR CODE HUNT

→ Place the 32 QR Code Cards on a specific Hunt around the classroom. Students can work individually, in pairs, or in small groups to find the answers to all 32 questions on their response sheets. They must scan the QR Code to find the answer for each corresponding question on their recording sheets. Students make an educated guess about the possible answer prior to scanning.

→ Early finishers who complete the QR Code Hunt can design their posters.

Wrap-up the activity by getting students together and asking them to share the facts they found the most interesting. They may refer to their recording sheets and posters.

†† These cards will assess student’s prior knowledge or alternatively pique their interest for them to want to scan the code to reveal the answer. Some cards also have picture clues (without giving away too much) to set up students for success.

Once a QR code is scanned, students are not directed to a website but rather to a text only link. If the QR Code Reader app attempts to display the answer with a web browser, choose the option of view in ‘plain text’ in settings/preferences.

PLEASE NOTE PRIOR TO PURCHASING:

The QR codes do not provide access to any online article, reason being the links change or they are often blocked by school admin. Instead, the codes once scanned reveal the answer to each question on the recording sheet. Students make an educated guess prior to scanning the code. Students will still be assimilating information, moving and having fun as they record the scanned answer in their own words. Evidence of learning will be found when students design their writing posters.

Read more about Scavenger Hunts at my blog here: