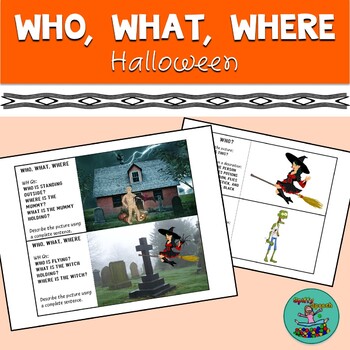 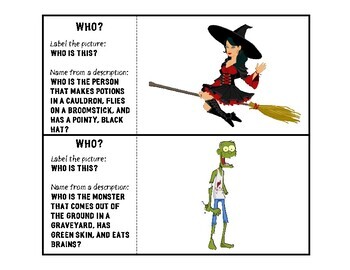 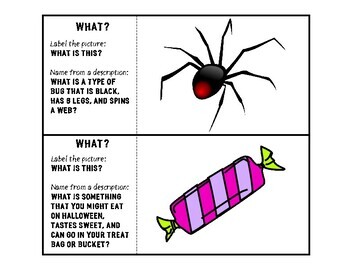 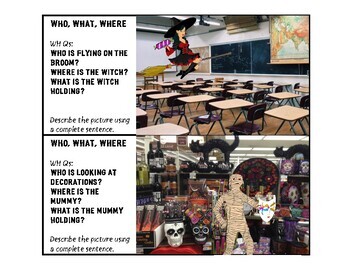 This resource contains 40 fun and colorful picture cards depicting Halloween and fall-themed nouns and scenes. There are 8 different cartoon monsters (ex: witch, ghost, zombie), 8 different cartoon objects/animals (ex: jack-o-lantern, witch's hat, spider), and 8 different photos of places (ex: haunted house, graveyard, pumpkin patch). These cards can be used to practice answering questions, describing (i.e., for an educator or peer to guess), naming items when described, and formulating noun+is+verb(ing)+object+location sentences. In addition to basic noun cards (depicting one noun per card), there are also 16 cards that combine each of the same people/things/places within one scene (e.g., the TEACHER is holding the CANDY in the CLASSROOM). If you don't need the question prompts (or don't want them to be visible), you can cut or fold across the dotted line so that you will just be left with Halloween picture cards.

This activity can be used as a LEVELED intervention in that students can first practice answering basic "who," "what," and "where" questions about a single person, object, and place. Once this skill is mastered, students can practice answering questions given a description (without a picture). Noting any discrepancy in response time between labeling pictures and naming the same items when described can help to pinpoint any word retrieval difficulties. Last, the monsters, objects, and places are all combined on one card so that the student can practice answering "who," "what," and "where" questions all about one picture when mixed up, which is more challenging than answering questions individually. A sentence strip has been included (with fill-in-the-blanks and miniature pictures of each noun) so that students can practice formulating complete sentences about each picture scene (e.g., "The teacher is holding the candy in the classroom.")