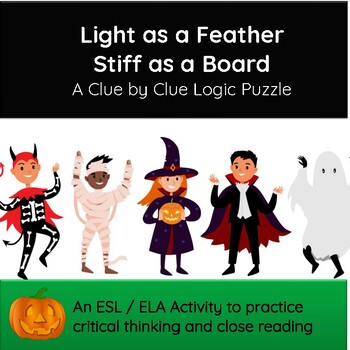 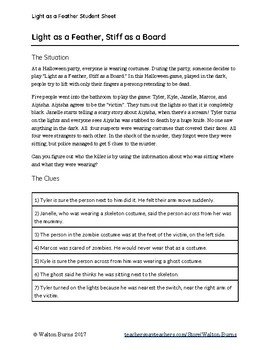 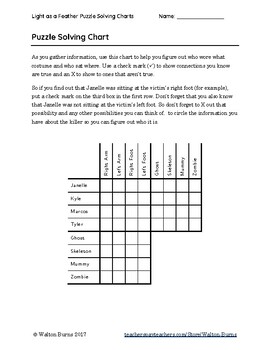 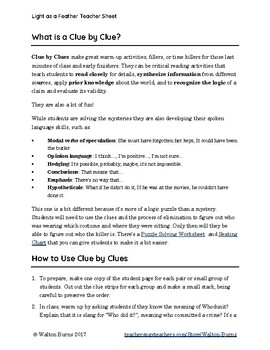 What is a Clue by Clue Mystery?

It's a great warm-up, critical thinking game, conversation starter, filler, or a time killer for early finishers. Students are given a mystery to solve--whodunit or how did they do it or why. They have to figure it out by reading a series of clues, one at a time. As they receive each clue, they speculate on its significance and what it tells them about the situation.

Once they have received all the clues, they should have enough information to figure it out!

Why Use Clue by Clues?

Clue by Clues encourage critical thinking and discussion. They are also close reading activities that teach students to look for details, synthesize information from different sources, apply prior knowledge about the world, and to recognize the logic of a claim and evaluate its validity.


While students are solving the mysteries they are also developing their spoken language skills, using language such as:

* Modal verbs of speculation: She must have forgotten her keys, It could have been the butler
* Opinion language: I think...., I’m positive..., I’m not sure...
* Hedging: It’s possible, probably, maybe, it’s not impossible.
* Conclusions: That means that...
* Emphasis: There’s no way that...
* Hypotheticals: What if he didn’t do it, If he was at the movies, he couldn’t have done it.

They are also a lot of fun!

Teacher Notes on how to use them are included with hints and the solution along with a students sheet that contains the clues for you to copy and cut up to give to students. There's also a Puzzle Solving Worksheet to help students in case it's too challenging.

The Movie of Death: Analyze and then write a scary Halloween story

Halloween True or False Test what students know about Halloween

This is Halloween Lyrics Gap-Fill

• The Weird Break In PowerPoint

• Murder of a Millionaire PowerPoint

• SAVE $$: Clue by Clue PowerPointBundle
Printable PDF Clue by Clues
• The Candy Thief A Halloween Mystery
• The Elevator Routine Riddle

• Murder of a Millionaire

• The Weird Break In