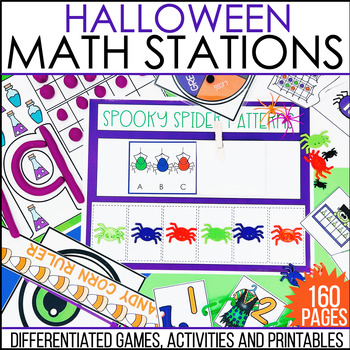 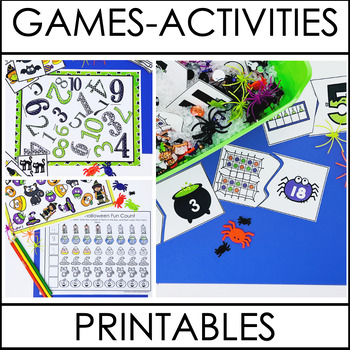 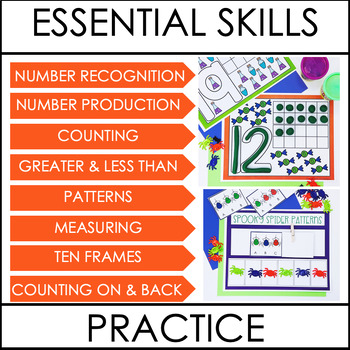 These math stations are sure to become your class favorites. Each one is differentiated, aligned and engaging. You will find 12 stations along with a student instruction card for each activity. This will help make these stations even more independent for you and for your students.
Here are the stations:
Station 1: Boo Brew: This is a differentiated number recognition game played in a pocket chart.
Station 2 – Witch’s Brew: Number recognition card game.
Station 3: Spooky Memory - Play like traditional memory. You will want two copies of the Top Cops number cards for the level of readiness of your players. Use only a manageable number of cards. Have them say the number when finding the match.
Station 4: Spooky Numbers Mats- This is a number recognition and counting activity that will appeal to your kinesthetic learners. You may differentiate by only providing a limited number of mats for students who have not yet mastered their numbers, or you may make all the mats available for those students who are ready. Students will use play-doh or Wikki Sticks to make the number indicated on the mat. Then they will place a play-doh ball in a box of each ten frame to represent the number. This will give them practice representing numbers in a ten frame as well.
Station 5: Linking Witchy Washy Laundry: This is a great fine motor activity for students and reinforces number order.
Station 6: Which Witch’s Clothes Comes Next? Works at counting on.
Station 7: Wishy Washy Number Order:
Station 8: Costume Count and Color: Counting scattered objects, representing numbers and comparing.
Station 9: Spooky Spider Patterns: Even though patterning is not part of common core, I like to offer this self-correcting, independent activity to reinforce pattern production and recognition which are so prevalent throughout so much of kindergarten work.
Station 10: Halloween Number Yatta: This activity will help your students with number fluency and counting objects that are scattered quickly.
Stations 11: Spooky Spin and Win: For this game, students can use either ten frame numbers, tally marks or numerals or ALL. They are comparing numbers and identifying whether they are 'bigger or small' or they can also use the 'odd or even' spinner if you prefer.
Station 12: The Costume Parade Counting Book: Print, cut in half and staple as a book for each child to complete. Students will practice number production to 10 along with counting.


K.CC.A.2 Count forward beginning from a given number within the known sequence (instead of having to begin at 1).
K.CC.A.3 Write numbers from 0 to 20. Represent a number of objects with a written numeral 0-20 (with 0 representing a count of no objects)
K.CC.B.4 Understand the relationship between numbers and quantities; connect counting to cardinality.
K.CC.B.5 Count to answer “how many?” questions about as many as 20 things arranged in a line, a rectangular array, or a circle, or as many as 10 things in a scattered configuration; given a number from 1–20, count out that many objects
K.CC.C.7 Compare two numbers between 1 and 10 presented as written numerals.

Follow me on Instagram
Total Pages
106 pages
Answer Key
N/A
Teaching Duration
N/A
Report this Resource to TpT
Reported resources will be reviewed by our team. Report this resource to let us know if this resource violates TpT’s content guidelines.