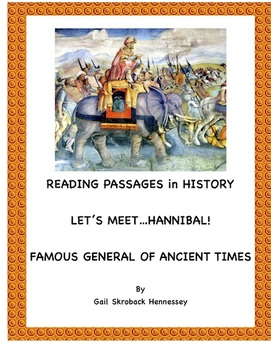 This resource is part of my new series, "Let's Meet..." famous people in ancient history.

With this biographical reading passage, students will learn about Hannibal, the famous general of ancient times. Studying the Phoenicians? Studying Ancient Rome and the Punic Wars? This resource would be a great addition! There is a Did You Know? section, comprehension questions, map activity and a teacher page with extensions and links and the key.

My Let's Meet... series is growing. Currently, I also have the following in the series:

Other resources on the Phoenicians:

1. NEW 2021:(NOT in the bundle)If you are studying the Phoenicians, this webquest will be a positive addition as an introduction/review to the first sea traders of the ancient world. The Phoenicians developed an alphabet which they shared to other cultures in their travels around the Mediterranean Sea. They developed the color purple and were skilled in glassmaking. Their sea traders may have traveled as far as Britain and down the coast of Africa, in a time when there were no navigational tools. https://www.teacherspayteachers.com/Product/Phoenicians-A-Webquest-7251150

2. The Phoenicians were the first to use the color purple: 1. Need a fun activity that involves kids finding answers that have PURPLE in it or are the color PURPLE? THERE are 17 statements in the complete PURPLE Game Activity. You can do this activity in one class, over a couple of days if being used as a end of the period activity or over a couple of days, if you wish to do the extension activities: Purple Game

With this biographical reading passage, students will learn about Hanno, the famous Phoenician sea explorer. There is a Did You Know? section, comprehension questions, map activity and a teacher page with extensions and links and the key. Hanno, Phoenician Sea Explorer

4. This product covers an introduction to the Phoenicians and their contributions to the world. Did you know that the Phoenicians were the first known sea traders or that they invented an alphabet that was passed along to the cultures they met? Did you know that they invented a purple dye that became very desired by rulers and the very wealthy? It is said that the Emperor Nero passed a law that only HE could wear the unique color.The resource includes notes as well as extension activities and links to help you teach your students about the first known sea traders in history. I also have included several comprehension questions, too. Depending on how many activities you'd like to do, the mini unit could take 2-3 days.https://www.teacherspayteachers.com/Product/Phoenicians-Learn-about-the-Ancient-Phoenicians-366696?st=86626eebd0a18ebcad27515c00ce3dcd

George Washington and the Camel

Thomas Jefferson and the Mammoth Cheese

Artemisia(Female Naval Commander during the Battle of Salamis)