Holiday Traditions from Around the World(Webquest) 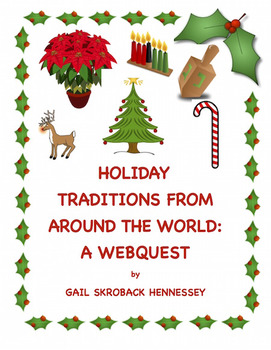 I have just added both the version with a Teacher page of extensions and key and a student version only. :-)

Whenever different cultures meet, ideas are exchanged. Did you know that skiing was started by the people of Norway? Did you know that the kite and fireworks were invented by the people of China? The idea of Trial by Jury and the idea of Democracy come to us from the Ancient Greeks. Chocolate came from the Aztecs people and the ancient Mesopotamian people first came up with a number system based on 60.

During the holidays is a great time to share with kids the many traditions which have been shared with different cultures. Learn the history behind some popular holiday traditions with this webquest.

NOTE: If you'd like a student version so you can use it with Google Classrooms and not have the teacher section with the key, just email me via Q/A and I will be happy to send you a copy.

If you live where there is snow, you have probably built a snowman. The snowman has been around for quite a while. In fact, the earliest drawing of a snowman was found in a book dating back to 1380! The book, “Book of Hours” was found in a library in the country of the Netherlands. Read about a famous sculptor hired to make a snowman, a snowman which helps predicts the weather in Switzerland and two more stories about snowmen! Four short reading passages with questions and extension activities: SNOWMEN Reading Passages

With this being the time of year for the story, A Christmas Carol, it's a great opportunity to learn about its author,Charles Dickens. One of the most famous writers of all times,Dickens also wrote Oliver Twist, Great Expectations, A Tale of Two Cities, David Copperfield and more. My webquest includes 8 fun/informative questions to learn about Dickens. Additional activities/links,too: >Charles Dickens, A Webquest

4. Learn about the history of New Year's with this fun/informative web quest. There are nine questions, lots of interesting customs of how people celebrate New Year's around the world, comprehension questions, extension activities and the key. Great activity for reading for information and research/computer skills. Included are also other holiday New Year's celebrations including Diwali, Chinese New Year, Songkran and Rosh Hashanah. The resources also mentions how April Fool's Day originated over when to celebrate New Year’s! New Year's Eve Webquest

Christmas Around the World

Total Pages
11 pages
Answer Key
N/A
Teaching Duration
40 minutes
Report this Resource to TpT
Reported resources will be reviewed by our team. Report this resource to let us know if this resource violates TpT’s content guidelines.