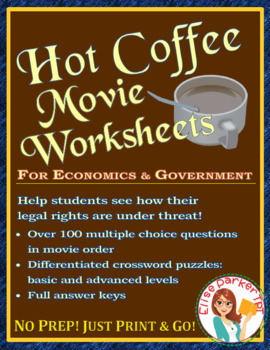 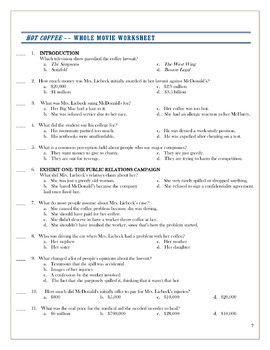 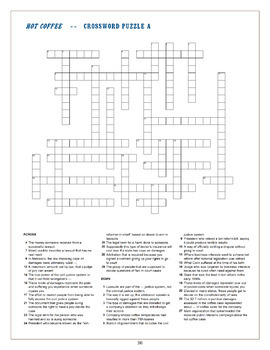 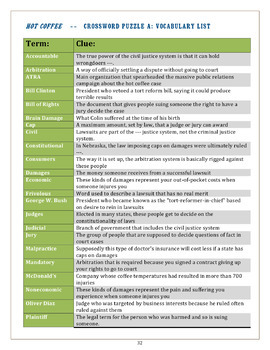 105 Multiple Choice Question in Movie Order plus a basic and an advanced crossword puzzle to use as a fun review! Includes full answer keys and multiple teaching options to make the most of this great government & economics movie!

Hot Coffee Brings the Real World Right Into Your Classroom!

Textbooks often present an idealized view of both government and economics, detailing how things are supposed to work instead of what actually happens out there in the real world. Hot Coffee can show students the rest of the story, revealing how the civil justice system has been compromised in recent decades.

Students will see how and why:

The movie Hot Coffee really gets students thinking hard about the country in which they live. How do I know? I hear them talking, and I don’t just mean during class discussions that are structured and organized by me as we proceed through the movie’s four segments. When the bell rings to end class, they’re still talking, and they keep it up as they’re walking out the door and heading to their next class!

In fact, a number of other teachers have come to me about the movie because their students have brought it up in other classes, either because they can’t stop talking about it or because they find a way to work it into issues under study there as well!

There are 105 questions in all, presented in movie order so that students can follow along and answer them as they watch – though of course, some teacher may want to reserve the worksheets for use as a test or quiz afterwards.

OPTION 1: SHOW THE WHOLE MOVIE AT ONCE

Most teachers will find that they can show the whole movie in only two days if they use the entire class period each day. The most efficient way to provide students with worksheets in this case is probably to print off all 105 questions in one packet. That’s the first option you’ll find presented after these introductory remarks. It’s a good way to go if you’re trying to conserve on paper, since in that format, the questions take up a little less space.

For student and teacher convenience, the “whole movie” worksheet has markers in boldfaced type indicating when various segments of the film begin. For more information on these major movie segments and when they start/end, read on into the “Option 2” details.

OPTION 2: SHOW THE MOVIE IN SEGMENTS

Unlike many documentary films, Hot Coffee is conveniently divided into clearly marked segments that allow teachers to deal with one of four key topics at a time. Inside the movie, these segments are called “exhibits,” in keeping with the film’s focus on the U.S. justice system.

Teachers who want to show just one of the movie’s segments at a time can use the second set of worksheets presented after these introductory remarks. They are divided up so that teachers can print off just the questions that go along with a certain “exhibit” in the movie.

For reference, the exhibits are:

1: The Public Relations Campaign (26 minutes): This segment details the efforts of big business to persuade the public that lawsuits are out of control and should be curtailed. This segment lasts from the beginning of the movie until 26:01. (However about the first four minutes of this segment serve as an introduction to the movie as a whole; then Exhibit One begins.)

2. Caps on Damages (15 minutes): This segment explains how the success of the public relations campaign has led to laws in many states that cap the amount of damages people can be awarded in a lawsuit. This segment focuses on the impact of such a cap on one family whose son suffered extreme brain damage as a result of a doctor’s malpractice. Exhibit Two lasts from 26:01 until 41:40.

3. Judicial Elections (18 minutes): This segment examines how the caps on damages enacted in some states came under threat from judges who were ruling them unconstitutional. The business community’s response was to take a greater role in judicial elections. This segment focuses on one elected judge who found himself under serious attack – ironically, via the justice system – so that even though chosen by the voters, he was effectively removed from power for several years. Exhibit Three lasts from 41:45 until 59:51.

4. Mandatory Arbitration (22 minutes): This segment critiques the rise of mandatory arbitration clauses, which consist of contractual language that bars a person from seeking compensation from damages in a court of law. Such clauses are becoming ubiquitous in many types of contracts, including those for credit cards, cell phones, and in many cases, employment itself. Exhibit Four lasts from 59:51 until the end of the movie, though the last couple of minutes of it serve as a review/recap of all the major issues raised.

Ideas for Using these Hot Coffee Worksheets in Class

Only a teacher knows what constitutes best use for a particular class, but I always find it helpful to see what creative approaches other teachers are using. Here are some good options for these worksheets.

I am sure there are many more fun and engaging ways to use these worksheets, but I do hope that you find them useful and that the film helps your students to become more engaged and enthused about government and economics topics!

Official Description of the Movie:

Is Justice Being Served?

Seinfeld mocked it. Letterman ranked it in his top ten list. And more than fifteen years later, its infamy continues. Everyone knows the McDonald’s coffee case. It has been routinely cited as an example of how citizens have taken advantage of America’s legal system, but is that a fair rendition of the facts? Hot Coffee reveals what really happened to Stella Liebeck, the Albuquerque woman who spilled coffee on herself and sued McDonald’s, while exploring how and why the case garnered so much media attention, who funded the effort and to what end. After seeing this film, you will decide who really profited from spilling hot coffee.

Total Pages
37 pages
Answer Key
Included
Teaching Duration
1 Week
Report this Resource to TpT
Reported resources will be reviewed by our team. Report this resource to let us know if this resource violates TpT’s content guidelines.