How the Earth Was Made: The Rockies Video Questions 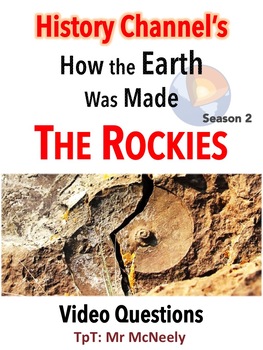 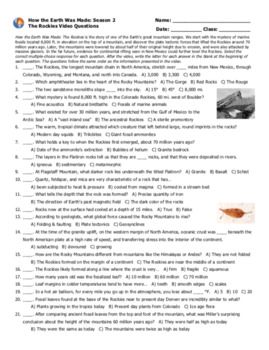 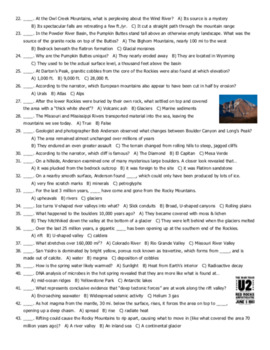 History Channel's How the Earth Was Made is a wonderful earth science documentary series. The episode titled "The Rockies" is the story of the discovery of the forces that created one of the world’s great mountain ranges. The episode is set up as a type of detective story, with evidence shown to back up a hypothesis. You will need to obtain a DVD of the episode, or stream on Amazon Video.

The video worksheet is a one-page, double-sided handout consisting of 43 multiple choice questions that track the progress of the video. This format enables the students to pay attention to the video while quickly recording their answers. In this way, the students are not bogged down in writing long responses, and they can better enjoy watching the video. A key is included, and the files are provided in both MS Word and PDF formats. I have also included a QTI file of all of the questions from the video worksheet. The QTI file enables a teacher to create a computerized version of the worksheet in a Learning Management System (LMS) such as Canvas or Moodle.

Overview: How the Earth Was Made: The Rockies

The Rockies are the longest mountain chain in North America, and they stretch 3,000 miles from New Mexico up into Canada. Despite being one of the world’s great mountain ranges, the Rockies present many puzzles concerning their origin and evolution.

At a site 8,000 feet in elevation lie the remains of a 70 million year old seafloor. The ground displays numerous spiral shaped impressions in rocks, many approaching the size of a truck tire. These are the shapes of extinct ammonites, creatures that exhibited a characteristic spiral shaped form, and whose modern descendants are cephalopods such as octopuses and squid. The death of these creatures, and the uplift of this site, date the beginning of the Rockies at 70 million years ago. The creatures also represent a sample of the life that once inhabited a vast inland sea that stretched from the Gulf of Mexico up to the Arctic. This body of water lasted over 30 million years. According to paleontologist Ian Miller of the Denver Museum of Natural History, the large ammonites were females that attracted much smaller males. The assembly likely got together to mate, and then died.

The video also highlights Red Rocks amphitheater near Denver, Colorado. The music venue is flanked by massive layers of red sandstone, each tilted nearly 45° into the sky. These rock formations are called Flatirons, and they appear to have been tilted by the forces that created the adjacent mountain range. The rocks are sedimentary rocks, and are made from sediments originally deposited in rivers. At Flagstaff Mountain, the flatirons lie atop a darker body of granite. Granite is an igneous rock that contains quartz, feldspar, and mica. Granite forms when magma cools beneath the Earth, and a measure of the iron content of the rocks indicates that they cooled at a depth of 15 miles. The forces that created the Rockies later uplifted the rocks, and in the process likely pushed the originally horizontal layers of the Flatirons into their characteristic tilted form.

The theory of plate tectonics provides a general explanation for the formation of the Rockies. In the theory, the Earth is composed of about a dozen large plates, pieces of crust that move, grow, and shrink relative to each other. At the boundaries between plates are found the greatest amount of Earth’s earthquake, volcanic, and mountain building activity. Despite this, the Rockies are unusual in that they were raised a long distance from the plate boundary on the west coast of the United States. At this plate boundary, oceanic crust was subducting underneath the western edge of the North American Plate. With subduction, a plate is pushed under an adjacent plate and becomes remelted into the mantle. It is proposed that the Rockies were pushed up at a line of weakness in the crust located further inland from the coast.

The ancestral Rockies completely formed in 10 million years. Fossilized leafs demonstrate the ancient climate, and the past elevations of the mountains. The climate 60 million years ago was tropical, and the mountains were twice as high as today. At 28,000 feet, they would have rivaled the current Himalayas of Asia. The past climate was displayed by comparing leaf fossils with smooth edges versus ones with toothed edges.

Another mystery of the Rockies is Wind River Canyon. It was formed when a river apparently cut through the entire range of the Owl Creek Mountains. This is contrary to ordinary river behavior, which seeks a path of least obstacles. In other locations shown in the video, Pumpkin Buttes and Darton’s Peak, eroded cobbles from the mountains are found up to elevations of 9,000 feet. These deposits are interpreted as the vestiges of a vast plain of eroded debris from the original Rocky Mountains. (Evidence of such erosion is also found in the European Alps.) As the mountains eroded, the valleys filled with debris, and later became capped by a layer of volcanic ash. A relatively flat plain of debris and sediment resulted, with just the tips of the tallest peaks emerging. This flat expanse allowed the Wind River to establish its course before cutting into the Owl Creek Mountains positioned below. The debris and sediments were later eroded and washed into the Missouri and Mississippi Rivers, and eventually out into the Gulf of Mexico, forming today’s mountain vistas.

Another force of nature attacking the Rockies was ice in the form of vast mountain glaciers. Observing from air, geologist Bob Anderson observed that the terrain changed from rolling hills to steep, jagged cliffs as he flew in an airplane from Boulder Canyon to Long’s Peak. In the mountains, he demonstrated how large boulders (glacial erratics) had been carried by glacial ice and deposited in areas that now display different rock types. The flowing ice had also polished the rocks beneath the boulders smooth, and had carved fine scratches called striations in the polished bedrock. All of this is evidence that past glaciers flowed like rivers of ice through the Rocky Mountains. The mountains also display characteristic U-shaped valleys carved by moving glaciers. The ice disappeared around 10,000 years ago leaving the current form of the mountains that we see.

Natural forces other than erosion and ice are predicted to further degrade the Rockies, and may lead to their eventual collapse. Apparently, over the last 25 million years, a gigantic rift has been opening up at the southern end of the Rockies in New Mexico. Evidence for this rifting is found as hot springs at San Ysidro. The hot springs display thick layers of travertine, a rock that forms from dissolved calcite in the mineral laden spring water. The spring water is likely heated by contact with Earth’s interior. (Interestingly, microbes similar to those found at Earth’s hydrothermal vents located at mid-ocean ridges flourish in the New Mexico hot springs.) Conclusive evidence of “deep tectonic forces” is represented by the collection of helium-3 gas that bubbles out of the spring water. This form of helium is generated by radioactive decay in Earth’s interior. It is thought that the motion of molten rock in the mantle, about 30 miles below the surface, causes the Earth’s crust on top to spread apart forming a rift valley. Such a phenomenon is also seen at the Great African Rift Valley. The North American rift is moving north into Colorado, and it may lead to the collapse of the Rocky Mountains in the far future.