IPAD DIGITAL SCOOT - Would You Rather 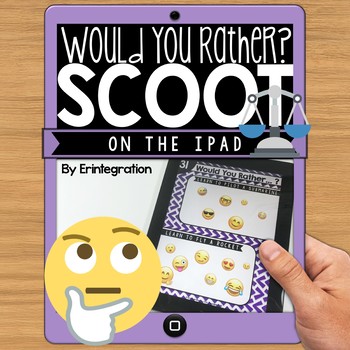 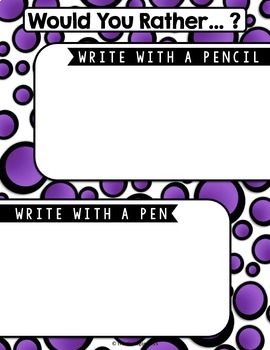 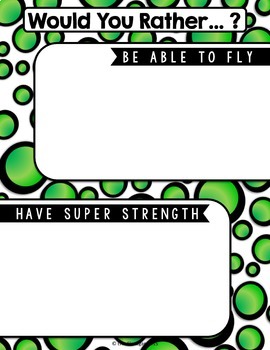 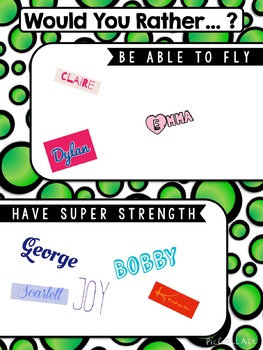 iPad Game - "Would You Rather" Digital Scoot!

My Digital Scoot™ games offer a technology twist on the traditional Scoot game! Instead of a task card, leave an iPad on each desk with the app Pic Collage.

Students scan the included QR codes and set the “Would You Rather” question that pops up as the background on Pic Collage™. Next students scoot from iPad to iPad signing and dragging their name to their choice for each Would You Rather question. Or have students use “stickers” to vote on their choice so they don’t become influenced by their friends. Students save finished work to the camera roll for easy sharing and display. Great way to introduce technology at the beginning of the year!

Each iPad will display a different “Would You Rather” Question – 33 fun, ice-breaker questions available digitally as a scan-able QR for quick downloading. Don’t want to use QR codes? No problem, print out each question and students can take a picture of it. iPad’s not working and you want to save ink? A blackline version is also included for a traditional pencil and paper Scoot game!

Packet includes everything your students need to use the app independently to play the game.
★ 33 Would-You-Rather-Type questions available as full color posters, blackline, or digitally via the included QR codes.
★ 33 Mini-iPads each with a QR code to a different question. Available in full color or blackline.
★ 6 step-by-step direction sheets with visuals to help students independently use the app from start to finish. Direction sheets include 4 flexible ways of playing the game.
★ Detailed teacher directions that explain how to set the game up and exactly which pages to print.


You will need either of the free app Pic Collage™. A clickable QR code linking to the App Store® online store listing is included.

Get the iPad Scoot BUNDLE and SAVE

More Digital Scoot™ on the iPad