Impeachment: What is this Word Called Impeachment? A Webquest 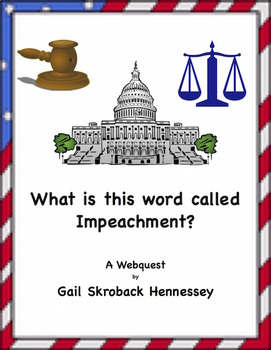 Gail Hennessey
1.3k Followers
Follow
Compatible with Digital Devices
The Teacher-Author has indicated that this resource can be used for device-based learning.

PLEASE note, you may need to open this document with something like Adobe reader.

NEW: Due to the Domestic Terrorist attack on our Capitol on January 6, 2021, the House of Representatives impeached Donald Trump(again), on January 13, 2021. The charge was "Incitement of insurrection". The senate trial on this new impeachment article will begin on Feb. 9th.

On December 18, 2019, the House of Representatives impeached Donald Trump, charging him with 2 articles of Impeachment, for trying to get the leader of Ukraine to find "dirt" on his political candidate and if he didn't help, aid from the United States would be denied. The Senate acquitted Donald Trump of the charges.

What exactly is impeachment? In U.S. History, only two other presidents have been impeached. Those presidents were Andrew Johnson and Bill Clinton. Neither were convicted during a trial and finished out their terms of office.  President, Richard Nixon, was going to be impeached but he resigned, pressured by members of his own Republican party, before he was impeached.

There are 11 web questions on this topic(including the Order of Succession and the Checks and Balances between the three branches of government). There is also a short Did You Know? section and several comprehension questions. The Teacher Page includes the key and several extension activities.

2. Learn more about Presidents with this web quest.

3. Do YOU Know Your Presidents is a series of three challenges. Each challenge worksheet has 25 questions(with 3 choices). The first challenge is the easiest with the third, the hardest.

5. Constitution Day is September 17th each year(except for 2017) when the day falls on a Sunday and will be celebrated on September 18th. This play would be a great addition to your lessons about the U.S. Constitution.