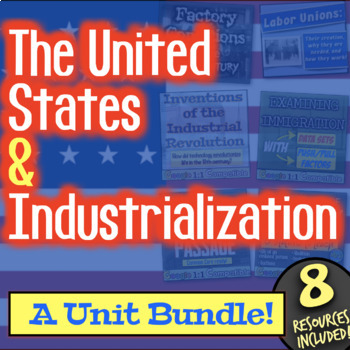 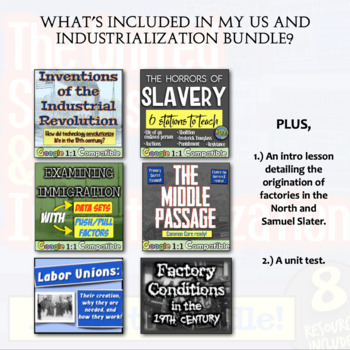 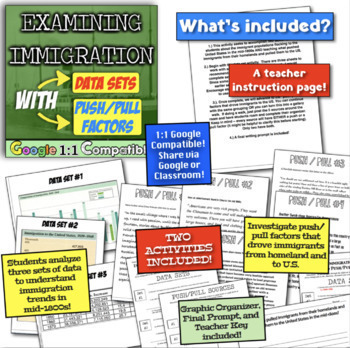 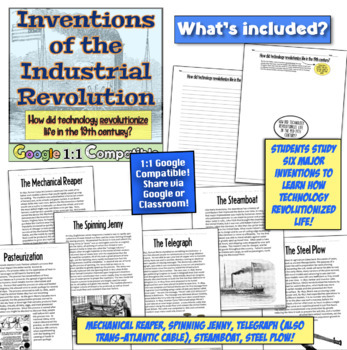 The United States and Industrialization Unit is included in the much larger American History Super Unit: Version 2/4, located here:

This unit now includes several resources that are 1:1 Google compatible version to be used in conjunction with Google Classroom. Just follow the included instructions for how to access the Google version, then share the resource through Google or assign via Google Classroom. This will allow students to type directly into the document!

Below is the table of contents:

✔ 1.) An introduction into the birth of factories in America. Students are introduced to Industrialization with a poem activity, then are engaged with a PowerPoint presentation on the birth of the factory, Samuel Slater, why factories were located where they were, and what a mill town was!

What was it like to work in a mid-to-late 19th century factory? In this lesson, students read excerpts from the Jungle, view images of child labor, watch a video clip of life on an assembly line, then participate in an assembly line simulation! Guaranteed excitement!

✔ 4.) Labor Unions: Their Creation, Why They Were Needed, and How They Work!

✔ 1.) A Slave Picture Introduction. Students are given cut-up pictures regarding slavery as they enter the classroom. Then, students must find their “puzzle pieces”. This is used to create groups for the next activity. Then, review each picture and ask the class what it is and what it can tell us about the Southern economy and Southern slavery.

✔ 2.) The Atlantic Slave Trade - Student Exploration into the Horrors!

✔ 3.) The Horrors of Slavery: 6 Stations to Responsibly Teach Slavery and Abolition!

✔ 4.) A Quilt Square Class Project. Each student creates a “quilt square” that focuses on one symbolic scene (or a bunch of symbols that represent slavery). Then, all squares are combined to create a large class project. Truly an amazing experience!

Check out these great supplements to the Early Industry and Age of Reform Unit:

✩ Industrialization and Age of Reform "I Can" Statements & Learning Goals!

Total Pages
121 pages
Answer Key
Included
Teaching Duration
1 month
Report this Resource to TpT
Reported resources will be reviewed by our team. Report this resource to let us know if this resource violates TpT’s content guidelines.