Informational Text: World's Most Extreme Environments-Antartica and the Arctic 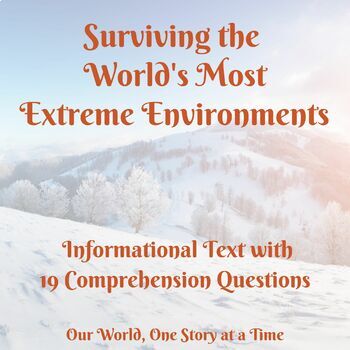 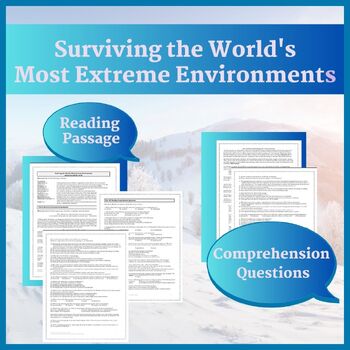 This mass of land, ice, and snow, the fifth-largest of the earth’s continents, extends over 5.4 million square miles. Sir Ernest Shackleton, the early twentieth-century leader of Britain’s Imperial Trans-Antarctic Expedition, made three voyages to explore it. In his book, South, the Story of Shackleton’s Last Expedition, he described the magnificent beauty of this lonely region. “We had seen God in its splendors, heard the text that nature renders. We had reached the naked soul of man” (24).

Scientists refer to the Arctic as a circumpolar region. This term identifies an area near or around one of the earth’s poles. Unlike Antarctica, it has a population of four million citizens. Paleo-Eskimos, a primitive people from Russia’s northernmost land, Siberia, were its first inhabitants. Throughout the centuries, other native tribes arrived to eke a living from conditions that most of us would find unbearable. In the early nineteenth century, Europeans from the Scandinavian countries, Sweden, Denmark, and Norway, set up outposts.

Danger to overexposure, in both Antarctica and the Arctic, can prove life-threatening. Our internal organs, the stomach, heart, lungs, and liver, have fat, bone, and skin to protect them. Without this three-layered shield, the human body could not survive. These organs require a consistent temperature of around 98.6 °Fahrenheit. If the blood encircling them reaches 95 °Fahrenheit or below, severe bodily stress occurs, resulting in hypothermia. This condition, when left untreated, causes the heart and respiratory system to cease normal functioning. In extreme cases, death can occur.

Our World One Story at a Time