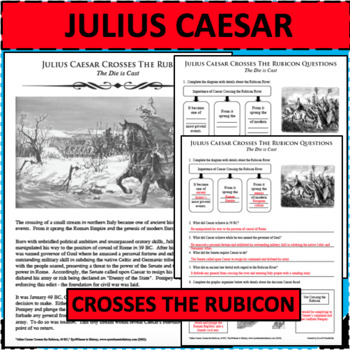 Allow your students to discover more about the JULIUS CAESAR CROSSES THE RUBICON using this Primary Source activity. Julius Caesar's crossing the Rubicon river in January 49 BC precipitated the Roman Civil War, which ultimately led to Caesar becoming dictator and the rise of the imperial era of Rome. Caesar had been appointed to a governorship over a region that ranged from southern Gaul to Illyricum. The crossing of a small stream in northern Italy became one of ancient history's most pivotal events. From it sprang the Roman Empire and the genesis of modern European culture.

This cross curricular, differentiated activity is designed to reach the varying learning levels of all students by allowing them to respond to the primary source and choose the questions they would like to answer.