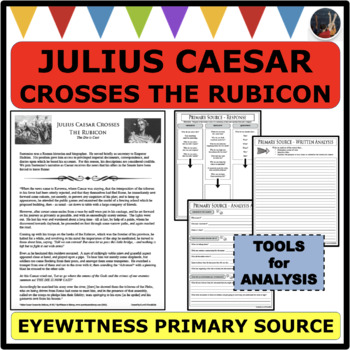 Allow your students to discover more about the JULIUS CAESAR CROSSES THE RUBICON using this eyewitness account activity. Julius Caesar's crossing the Rubicon river in January 49 BC precipitated the Roman Civil War, which ultimately led to Caesar becoming dictator and the rise of the imperial era of Rome. Caesar had been appointed to a governorship over a region that ranged from southern Gaul to Illyricum.

Total Pages
2 pages
Answer Key
Does not apply
Teaching Duration
N/A
Report this Resource to TpT
Reported resources will be reviewed by our team. Report this resource to let us know if this resource violates TpT’s content guidelines.