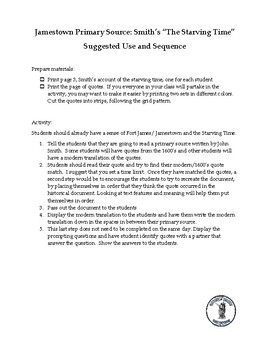 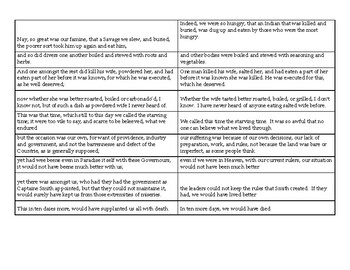 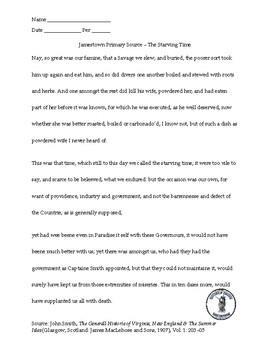 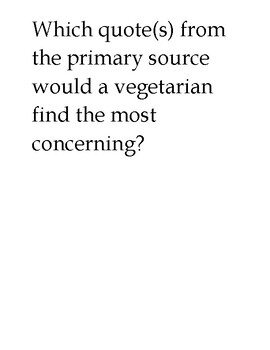 This activity helps students access a primary source from the 1600's. The source, written by John Smith, describes "The Starving Time" in Jamestown. The passage begins:

"Nay, so great was our famine, that a Savage we slew, and buried, the poorer sort took him up again and eat him..."

Excerpt from "Suggested Use and Sequence"

Students should already have a sense of Fort James/ Jamestown and the Starving Time.

2. Students should read their quote and try to find their modern/1600’s quote match. I suggest that you set a time limit. Once they have matched the quotes, a second step would be to encourage the students to try to recreate the document, by placing themselves in order that they think the quote occurred in the historical document. Looking at text features and meaning will help them put themselves in order.

3. Pass out the document to the students

5. This last step does not need to be completed on the same day. Display the prompting questions and have student identify quotes with a partner that answer the question. Show the answers to the students.

Excerpt from the quote activity worksheet

1600's language: "Nay, so great was our famine, that a Savage we slew, and buried, the poorer sort took him up again and eat him,"

Modern translation: " Indeed, we were so hungry, that an Indian that was killed and buried, was dug up and eaten by those who were the most hungry."

Excerpt of one of the text-dependent questions:

Which quote(s) from the primary source shows the lack of work among the colonists?