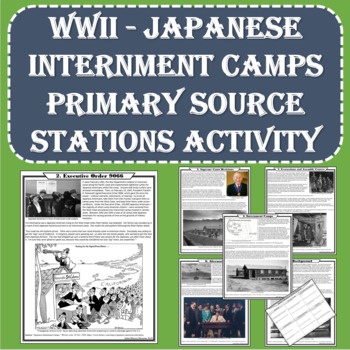 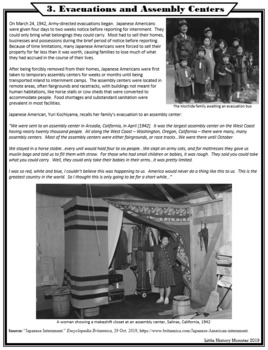 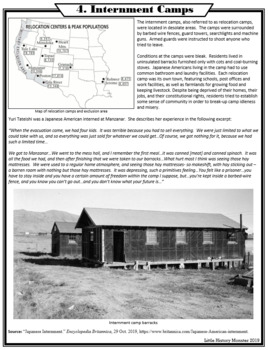 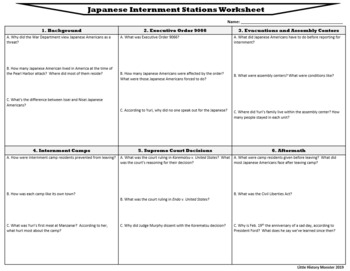 "It was depressing, such a primitive feeling…You felt like a prisoner…you have to stay inside and you have a certain amount of freedom within the camp I suppose, but…you’re kept inside a barbed-wire fence, and you know you can’t go out…and you don’t know what your future is…”

The intent of this lesson is to expose students to a variety of topics in a short amount of time using fun and engaging methods. Each station of this NO PREP activity contains enthralling primary source accounts. After completing this lesson, students will have an understanding of the actions taken by the United States government to intern Japanese Americans during World War II and the hardships faced by Japanese Americans during this period of time. Students will examine each of the following topics:

Each station contains a brief description, along with intriguing primary source accounts and historic photosets. The lesson is easily adaptable to fit your teaching style. The following methods have proven to be the most successful in my classroom:

1. Hang the information sheets around the class and have students rotate to each sheet.

- This is my favorite because it gets students up and moving. You can assign the worksheet that accompanies this activity, or simply have them summarize each topic as they rotate.

- I assign a number to each group member (number the first group, then start back at 1 for the next group, so that you have multiple 1’s, 2’s, etc. throughout the class) and after students have had adequate time to prepare I tell them all the 2’s are presenting. This method motivates students because they don’t know which group member is presenting until it is time to present.

3. Form groups of 6 and have the students pass around the information sheets.

- I’ve found the best approach for this method is to give students a set amount of time and then have all students pass their sheets to the right when told.

The versatility of this activity allows for several culminating assessments. Typically, once students have completed one of the methods above, I have them write a journal entry from the point of view of a Japanese American relocated during the war. I encourage them to include as much information from the stations as possible. Also, I have the students respond to the following prompt: “Do you believe the government was justified to order the internment of Japanese Americans during the war? Why or why not? How could the U.S. government have handled the situation better?” Then, we have a class debate to determine what factors were most influential in the responses of the students.