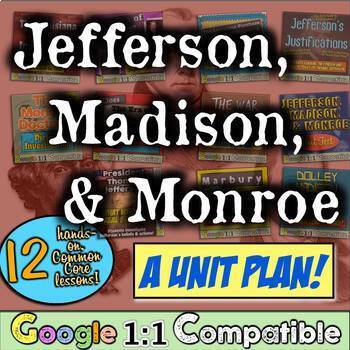 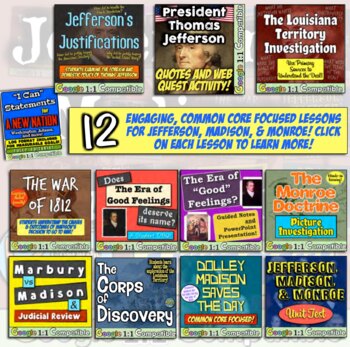 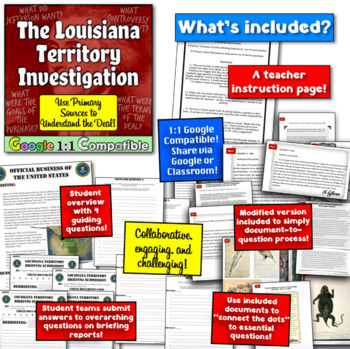 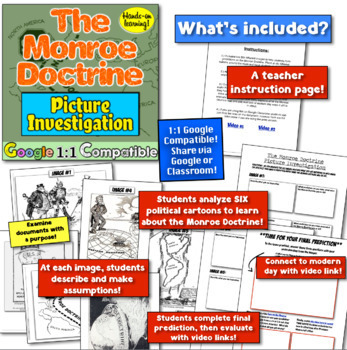 The Jefferson, Madison, and Monroe Unit is included in the much larger American History Super Unit: Version 2/4, located here:

Instead of paying over $40 if buying all of these resources separately, save over 30% by buying this bundle!

Here is a table of contents of what is covered in this unit:

✔ 1.) Marbury vs Madison: The establishment of the principle of Judicial Review lesson Students are engaged with a PowerPoint and guided graphic notes to make the complex Marbury v. Madison Supreme Court case easy! Video links included to increase engagement!

✔ 2.) Jefferson's Justifications! The Foreign and Domestic Policies of our Third President! Text and graphic organizer guide students through three major policy decisions that took place during Jefferson's presidency. Students learn how the Louisiana Territory, the War with the Barbary States, and the Embargo Act forced Jefferson to change his thinking!

✔ 4.) Louisiana Territory, Corps of Discovery, Lewis & Clark, Sacagawea, Guided Notes! Guided notes and an engaging PowerPoint details the journey of Lewis and Clark, their entourage, and the goals of the expedition!

✔ 5.) President Thomas Jefferson: What Were His Real Beliefs? Great Station Work! Students investigate 8 different sources spanning the life of Thomas Jefferson, from the Declaration of Independence to his death in 1826, to compare his actions in life to the words he spoke. Was he honest? High engagement!

✔ 7.) Dolley Madison Saves The Day: Common Core Focused War of 1812 Source! Enhance instruction on the War of 1812 with this resource that focuses on the impact played by Dolley Madison in protecting (and securing) key American artifacts!

✔ 9.) Era of Good Feelings: Guided Notes & PowerPoint! Show both sides of this Era! This PowerPoint and guided notes go very well with the previous activity as it begins by establishing why the Era of Good Feelings deserves its name. Students learn about the spread of nationalism, the demise of the Federalists, and the American System of Internal Improvements. Then, this activity provides key details that are negatives of this era: slavery, sectionalism, and more!

✔ 12.) New Nation "I Can" Statements & Learning Goals! Washington, Adams, Jefferson! A learning goal log and a set of "I Can" Statements are included in this unit (both in log format and in poster size) to track student learning! This log actually from from Washington to Monroe!

Are you interested in teaching the presidencies of George Washington and John Adams? Then check out the New Nation unit here!

Total Pages
248 pages
Answer Key
Included
Teaching Duration
2 months
Report this Resource to TpT
Reported resources will be reviewed by our team. Report this resource to let us know if this resource violates TpT’s content guidelines.