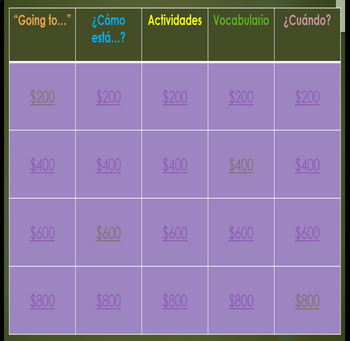 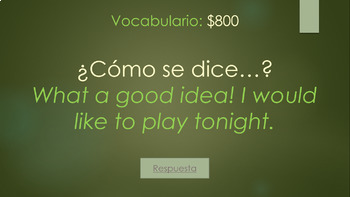 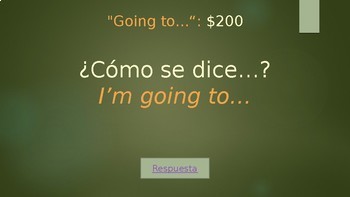 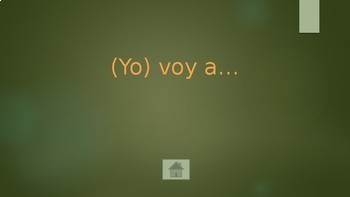 Play this game with your Spanish 1 students to practice the vocab and skills found in Chapter 4B of Realidades 1. This version does NOT have vosotros. If you want the version that includes vosotros, check out this one: Jeopardy Realidades 1, 4B con vosotros

This is an interactive game in a Power Point that you can project from your computer and play on the screen or share with your students for them to play in small groups. The game has five categories with four clues each. The clues get more difficult as the money amounts increase. I use as much of the vocab from the chapter as I can in context. The game has hyperlinks from the home slide to each of the clue slides, from the clue slides to their answers, and from answer slides back to the home slide. When you click on the dollar amount link from the home slide, the color of the dollar amount will change so that everyone can see that the clue has already been picked. If you want to play the game more than once, close and reopen the file in order to make the money amount colors reset back to the "unpicked" color. You'll have to keep the time limits for the kids to answer and keep score, but the game does the rest.

“Going to…” Has clues that ask students to use ir + a + infinitive in context. For example, ¿Cómo se dice…? She is going to play baseball. for $600

¿Cómo está…? Has clues that ask students to use the adjectives in the chapter. There are some picture clues that correspond with my vocab quiz for this chapter (tired-looking tiger, sick boys in bed, sad emoji), and a word clue in which students have to translate "ocupado" in context from Spanish to English.

Actividades Has clues about the "jugar al..." vocab as well as "ir de pesca" and "ir de camping." Some of them are picture clues that correspond with my vocab quiz for this chapter, and a word clue for $800: ¿Cómo se dice...? They (feminine) play volleyball and you (informal) play soccer.

¿Cuándo? Has clues that ask students to translate terms and sentences that include time vocab. For example, ¿Cómo se dice…? at 6:00 in the morning for $600

When I've played Jeopardy-type games with my classes, I've put them into groups of 4-5. I go around the room in a certain order and call on groups to choose a clue. They have a time limit to answer, and if they get it wrong or don't get it in time, the next group in the order can steal it. If the second group can't steal it right away, the next group can steal, etc. This helps to keep everyone engaged because they might get to steal. You can do it whole-class with three larger groups or with groups of 3-4 where each group has their own laptop. The game can be played in a variety of ways--whatever works for you and your kids!

Check out my vocab quiz for this chapter: Prueba de Vocab Realidades 1, 4B