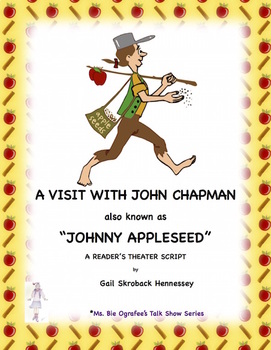 Part of my Ms. Bie Ografee Talk Show Series. This biographical Reader's Theater Script is on John Chapman, better remembered as Johnny Appleseed. Chapman said of himself,“by occupation,(I was) a gatherer and planter of apple seeds”. This pioneer nurseryman helped to introduce apple trees to Indiana, Illinois, Ohio and Pennsylvania. Unlike many people, John Chapman was an American hero, DURING his lifetime. He is known for his kindness toward other people and all living creatures, his efforts in conservation and the many apple trees he started during his life.

There area 8 Audience Questioners in the complete resource. There are 12 Did You Know? fun facts about apples, 9 comprehension questions, a teacher page with 9 extension activities, the key and additional links of interest.

Great for a Friday biography day, during a study on pioneers or a unit on apples!