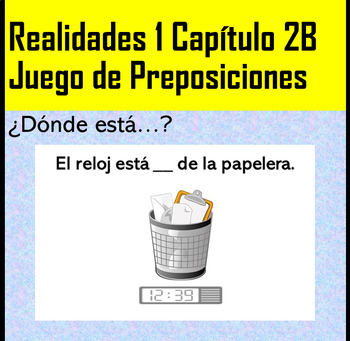 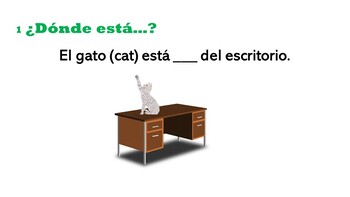 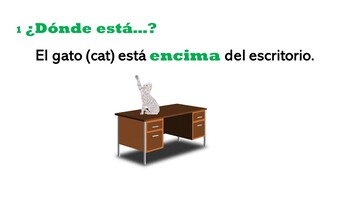 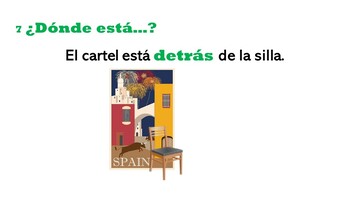 To play this white board game, you need a computer and projector to show the slides, small white boards for each students or for each pair of students, dry erase markers, and erasers.

This resource has 47 slides, including title slide, instruction slide, 22 clue slides and 22 answer slides, and key slide at the end. Each of the game slides says, "¿Dónde está...?" and then a sentence that describes the positions of the two shown objects. Most of the objects are from the Realidades 1 Chapter 2B vocab, and all of the prepositions are the ones on the Repaso page of the chapter. They include al lado, detrás, encima, debajo, delante, en, (3 slides each) allí, and aquí (2 slides each). For example, on one slide there's a picture of a flag next to a poster. It says, "La bandera está __ del cartel." Then the next slide is exactly the same, but it says "La bandera está al lado del cartel." This way students can see the answer after the round in order to reinforce the answer.

To play, I explain the rules, give out the boards/markers/erasers, choose judges and give them answers, and do one for practice. Then I tell them that we're starting for real, say, "tres, dos, uno..." and change the slide. Students will talk to each other, write the color with the correct ending, and hold the board up until we've seen everyone and two teams get points. If there are any that they struggle with, I take a minute to explain why it is what it is. At the end, I usually give the winning team candy. :)