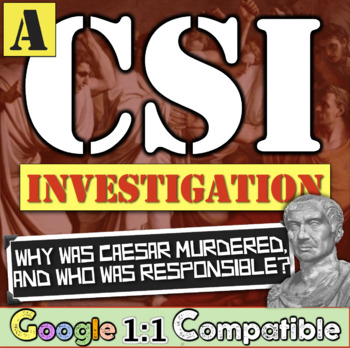 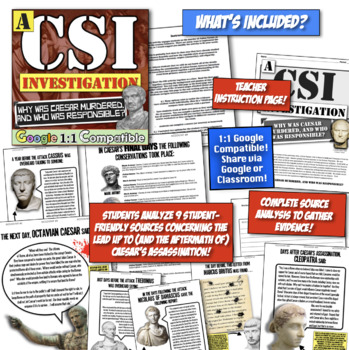 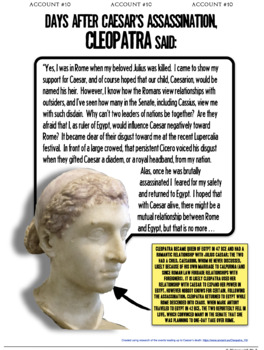 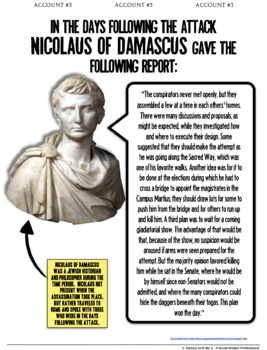 In this Julius Caesar CSI investigation, students take on the role of an investigator as they read testimony (compiled from primary and secondary evidence) related to Caesar's assassination. Ultimately, students seek to understand why Caesar was killed and who may have played a role. Students hear and learn from Cleopatra, Nicolaus of Damascus, Suetonius, Octavian, Mark Antony, Marcus Brutus, Sulla, and others. Students investigate their words and study their relationship to Caesar to gather details surrounding this moment in history. To conclude, students complete a short writing assignment where they use what they have learned to answer two overarching questions.

☆ ☆ Get this engaging resource (and a huge discount) when you purchase my Ancient Rome activities unit located here bundle!

Check out all of my CSI investigations below!

✔ Salem Witch Trials - A CSI Investigation! Was there witchcraft in Salem?

✔ The Tulsa Race Massacre: A CSI on the Massacre in Tulsa!

✔ The KKK and the Civil Rights Movement: A CSI on the KKK!

✔ Shakespeare: Did He Exist? A CSI Investigation! Was William Shakespeare real?

✔ Maya CSI Investigation: What Happened to the Once-Great Mayan Empire?

✔ King Tut: Was he murdered? A CSI Investigation on Ancient Egypt! Engaging!

✔ Lost City of Atlantis: A CSI Investigation! What Happened to Atlantis?

✔Who was Rasputin? Mini CSI Investigation into Rasputin and Russian Revolution!

Total Pages
40 pages
Answer Key
Included
Teaching Duration
4 days
Report this Resource to TpT
Reported resources will be reviewed by our team. Report this resource to let us know if this resource violates TpT’s content guidelines.

Log in
to see state-specific standards (only available in the US).
CCSSRH.6-8.10
By the end of grade 8, read and comprehend history/social studies texts in the grades 6–8 text complexity band independently and proficiently.
CCSSRH.6-8.9
Analyze the relationship between a primary and secondary source on the same topic.
CCSSRH.6-8.8
Distinguish among fact, opinion, and reasoned judgment in a text.
CCSSRH.6-8.6
Identify aspects of a text that reveal an author’s point of view or purpose (e.g., loaded language, inclusion or avoidance of particular facts).
CCSSRH.6-8.5
Describe how a text presents information (e.g., sequentially, comparatively, causally).