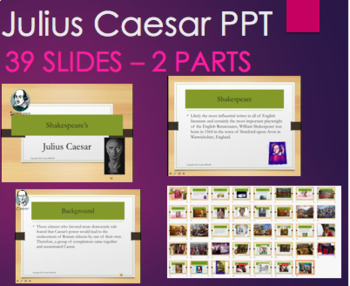 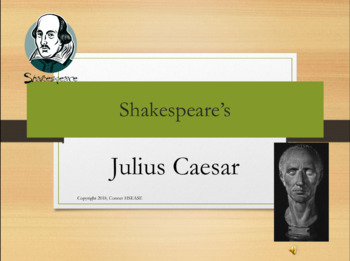 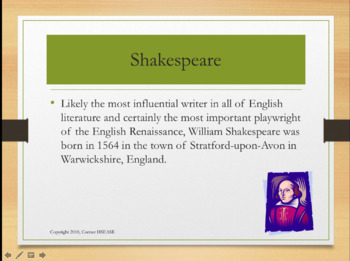 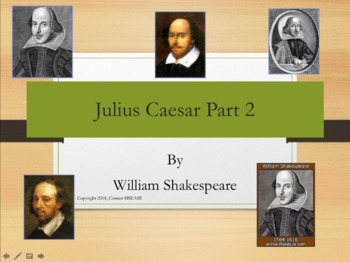 Likely the most influential writer in all of English literature and certainly the most important playwright of the English Renaissance, William Shakespeare was born in 1564 in the town of Stratford-upon-Avon in Warwickshire, England.

It was probably the first play performed in the Globe Theater, the playhouse that was erected around that time in order to accommodate Shakespeare’s increasingly successful theater company.

Julius Caesar takes place in ancient Rome in 44 b.c., when Rome was the center of an empire stretching from Britain to North Africa and from Persia to Spain.

Yet even as the empire grew stronger, so, too, did the force of the dangers threatening its existence: Rome suffered from constant infighting between ambitious military leaders and the far weaker senators to whom they supposedly owed allegiance.

A succession of men aspired to become the absolute ruler of Rome, but only Julius Caesar seemed likely to achieve this status.

Those citizens who favored more democratic rule feared that Caesar’s power would lead to the enslavement of Roman citizens by one of their own. Therefore, a group of conspirators came together and assassinated Caesar.

The assassination, however, failed to put an end to the power struggles dividing the empire, and civil war erupted shortly thereafter.

The plot of Shakespeare’s play includes the events leading up to the assassination of Caesar as well as much of the subsequent war, in which the deaths of the leading conspirators constituted a sort of revenge for the assassination.

Shakespeare’s contemporaries, well versed in ancient Greek and Roman history, would very likely have detected parallels between Julius Caesar’s portrayal of the shift from republican to imperial Rome and the Elizabethan era’s trend toward consolidated monarchal power.

In 1599, when the play was first performed, Queen Elizabeth I had sat on the throne for nearly forty years, enlarging her power at the expense of the aristocracy and the House of Commons. As she was then sixty-six years old, her reign seemed likely to end soon, yet she lacked any heirs (as did Julius Caesar).

Many feared that her death would plunge England into the kind of chaos that had plagued England during the fifteenth-century Wars of the Roses. In an age when censorship would have limited direct commentary on these worries, Shakespeare could nevertheless use the story of Caesar to comment on the political situation of his day.

" Friends, Romans, countrymen, lend me your ears; I come to bury Caesar, not to praise him "

Probably written in 1599, Julius Caesar was the earliest of Shakespeare's three Roman history plays. Like Antony and Cleopatra and Coriolanus, Julius Caesar is a dramatization of actual events, Shakespeare drawing upon the ancient Roman historian Plutarch's Lives of Caesar, Brutus, and Mark Antony as the primary source of the play's plot and characters.

Primary Source of the Plot:

Included here are some of the Classical sources of modern knowledge about the historical Julius Caesar. Several of these sources were also used by Shakespeare in the creation of his play Julius Caesar. Also included here is a Renaissance version of the story that is roughly contemporary with Shakespeare's.

Letters and Orations of Cicero

History of the Drama

Julius Caesar is a dramatization of actual events. He was assassinated in 44 B.C.

It is believed that his mother endured agonizing surgery in order to extract him at birth. This belief gave rise to the term "Caesarean birth."

This recipe is very close to the original version created in 1924 by Caesar Cardini, an Italian restaurateur in Tijuana, Mexico.  That's right, the salad is named after its creator, a Chef, not Julius Caesar of the famed Roman empire.

The play is tightly structured. It establishes the dramatic problem of alarm at Julius Caesar's ambition to become "king" (or dictator) in the very first scene and introduces signs that Caesar must "beware the Ides of March" from the outset.

Before its midpoint, Caesar is assassinated, and shortly after Mark Antony's famous funeral oration ("Friends, Romans, and countrymen … "), the setting shifts permanently from Rome to the battlefields on which Brutus and Cassius meet their inevitable defeat.

Julius Caesar is also a tragedy; but despite its title, the tragic character of the play is Brutus, the noble Roman whose decision to take part in the conspiracy for the sake of freedom plunges him into a personal conflict and his country into civil war.

The most important characters in the play are:

Literary scholars have debated for centuries about the question of who exactly is the protagonist of this play. The seemingly simple answer to this question would be Julius Caesar himself—after all, the play is named after him, and the events of the play all relate to him. However, Caesar only appears in three scenes (four if the ghost is included), thus apparently making him an unlikely choice for the protagonist who is supposed to be the main character.

Meanwhile, Brutus, who is in the play much more often than Caesar (and actually lasts until the final scene), is not the title character of the play and is listed in the dramatis personae not only after Caesar but after the entire triumvirate and some senators who barely appear in the play

Julius Caesar is a highly successful but ambitious political leader of Rome and his goal is to become an unassailable dictator. Caesar is warned that he must "beware the Ides of March" . The prophecy comes true and Caesar is assassinated.

Brutus is a well respected Roman senator who helps plan and carry out Caesar's assassination which he believes will rid Rome of a tyrant. Caesar's friend Mark Antony provides the famous funeral oration ("Friends, Romans, and countrymen…") Brutus and Cassius meet their inevitable defeat. Brutus, the noble Roman, whose decision to take part in the conspiracy for the sake of freedom, plunges his country into civil war.

The quotations from Julius Caesar are amongst Shakespeare's most famous

"Friends, Romans, countrymen lend me your ears; I come to bury Caesar, not to praise him". - (Act III, Scene II).

It is believed that Julius Caesar was first performed between 1600 and 1601. In the Elizabethan era there was a huge demand for new entertainment and Julius Caesar would have been produced immediately following the completion of the play.

It is believed that Julius Caesar was first printed in the First Folio in 1623. As William Shakespeare clearly did not want his work published details of the play would have therefore been noted, and often pirated without his consent, following a performance.

Total Pages
39 pages
Answer Key
N/A
Teaching Duration
30 minutes
Report this Resource to TpT
Reported resources will be reviewed by our team. Report this resource to let us know if this resource violates TpT’s content guidelines.