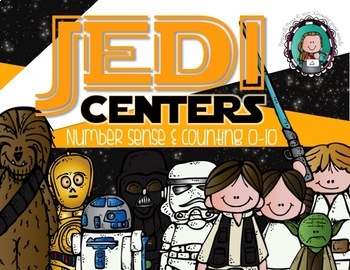 This set of KINDERGARTEN JEDI CENTERS is loaded with Number Sense, Counting, and One-to-One Correspondence activities for the numbers 0-10. See how we use them here.

Droid Direction cards for independent work are included for each activity.

Your students will:
** Sort Odd and Even numerals
** Identify numerals that are Greater Than, Less Than and Equal to others
** Identify Before and After numbers
** Count-On from a given number
** Count Back from a given number
** Order numbers from smallest to largest
** Complete a variety of Number Sense/One-to-One Correspondence activities for each numeral (counting fingers, number word and money; tally marks, dice and stars; ten frame and domino)

There are 6 “THE NUMBER” recording sheets to asses what your students have learned after they have completed a variety of the centers. These sheets ask your students to complete a various tasks including:
** Identifying if the target number is odd or even
** Writing the number word
** Dotting the ten frame
** Counting the number by circling or coloring objects, or drawing their own
** Showing the number on dice, dominoes and fingers
** Drawing the number as tally marks
** Identifying the numbers that come before and after
** Identifying numbers that are greater or less than the target number
** Counting on, or back from the number.
Total Pages
80 pages
Answer Key
N/A
Teaching Duration
N/A
Report this Resource to TpT
Reported resources will be reviewed by our team. Report this resource to let us know if this resource violates TpT’s content guidelines.