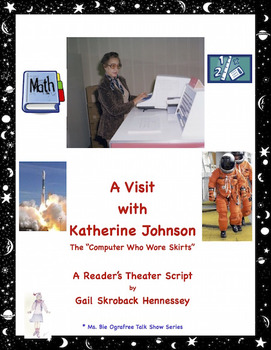 Learn about Katherine Johnson, a physicist, space scientist and mathematician, who played a very important role with NASA’s early space missions. The movie Hidden Figures highlights the role of NASA's "computers" such as Katherine Johnson and their contributions. Part of my Ms. Bie Ografee Talk Show Series of Reader's Theater Scripts, there are comprehension questions, a Did You Know? section,a Teacher page with extensions/links and key. A great STEM biography!

Additional Resources on this Topic You May Find of Interest:

1. Learn about the history of space with this informative web quest.

There are 12 web questions, comprehension questions and extension activities:

2. Learn about Astronaut John Glenn's historic flight to become the first American to Orbit the Earth. Years later, he would also become the oldest American to go on the Space Shuttle! This biographical web quest also contains several questions about the early days of space exploration. There are several

extension activities and the key: John Glenn, A Webquest

Use this informational and fun script for students to learn about Marie Curie, the Polish scientists who was a pioneer in the area of radioactivity. *Students will find some of the uses of radioactive materials in the 1920s most interesting(as did I). Radium was placed in toothpaste to make teeth whiter, it was placed in shampoo, face creams, even chocolate! Even Marie and Pierre kept a glass jar with radium salt on their night stand because they were fascinated by its glow. People didn't realize the harmfulness of radioactivity.

A "studio" audience asks questions of Ms. Bie Ografee's guest, Marie Curie. There are comprehension questions, a Did You Know? section, a Teacher Page with extension activities, key and additional links.Marie Curie: A Reader's Theater Script

4. A Biologist and marine zoologist, Carson’s books shared her love of nature, especially the ocean and its inhabitants. Her book, Silent Spring, sparked concern in how chemical pesticides were harming our environment. Carson helped to start the environmental movement in our country, which led to the creation of the U.S. Environmental Protection Agency. This Reader's Theater Script could be used as a STEM biography any time of year or especially during the time of Earth Day: Rachel Carson: A Reader's Theater Script

5. An English primatologist, Jane Goodall, has helped to change the attitudes people had toward animals, specifically the chimpanzee. Her method of studying chimpanzees involved living amongst them, for over 55 years. She is also known as an anthropologist, humanitarian and writer. She has worked for better treatment of animals in zoos and protection of the habitat of animals in the wild. https://www.teacherspayteachers.com/Product/Jane-Goodall-A-Readers-Theater-Script-4836410