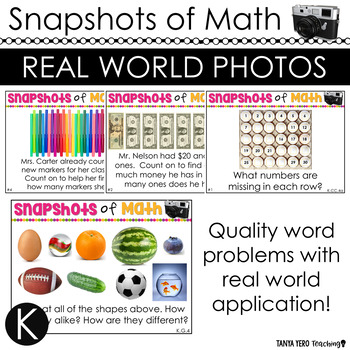 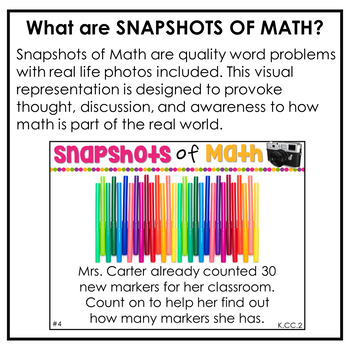 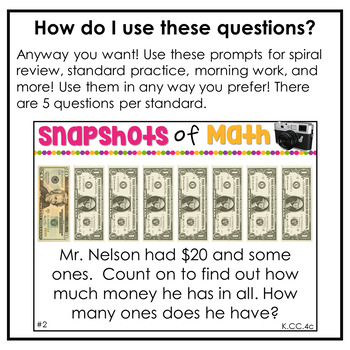 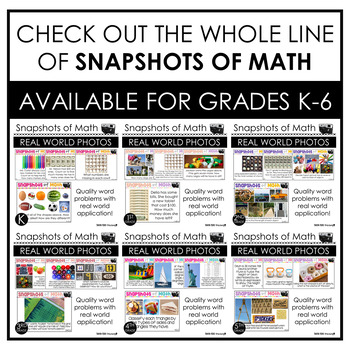 Visual representation is important to students. Get your students excited about math by Using Snapshots of Math Word Problems!

This purchase contains word problems for all the kindergarten grade math standards. Each word problem is applicable for young learners and includes a photo for visual representation. Each question is on a PowerPoint slide for easy use and can be used during a whole group lesson, to introduce a skill, or extra practice.

**There are 5 questions for each standard.**

➥ K.OA.5 – Demonstrate fluency with addition and subtraction within 5

Number and Operations in Base Ten

➥ K.NBT.1 – Compose and decompose numbers from 11 to 19 into ten ones and some further ones.

➥ K.CC.2 – Count forward beginning from a given number within the known sequence, instead of having to begin at 1.

➥ K.CC.3 – Write numbers from 0 to 20. Represent a number of objects with a written numeral 0-20, with 0 representing a count of no objects.

➥ K.CC.4 – Understand the relationship between numbers and quantities.

➥ K.CC.5 – Count to answer “How many?” in various situations.

Total Pages
140 pages
Answer Key
Included
Teaching Duration
1 Year
Report this Resource to TpT
Reported resources will be reviewed by our team. Report this resource to let us know if this resource violates TpT’s content guidelines.

Log in
to see state-specific standards (only available in the US).
CCSSK.G.B.6
Compose simple shapes to form larger shapes. For example, “Can you join these two triangles with full sides touching to make a rectangle?”
CCSSK.G.B.5
Model shapes in the world by building shapes from components (e.g., sticks and clay balls) and drawing shapes.
CCSSK.G.B.4
Analyze and compare two- and three-dimensional shapes, in different sizes and orientations, using informal language to describe their similarities, differences, parts (e.g., number of sides and vertices/“corners”) and other attributes (e.g., having sides of equal length).
CCSSK.G.A.3
Identify shapes as two-dimensional (lying in a plane, “flat”) or three-dimensional (“solid”).
CCSSK.G.A.2
Correctly name shapes regardless of their orientations or overall size.