Labor Unrest in the U. S. - The Great Anthracite Coal Strike of 1902 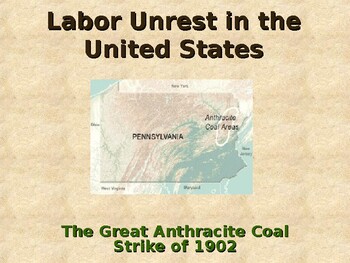 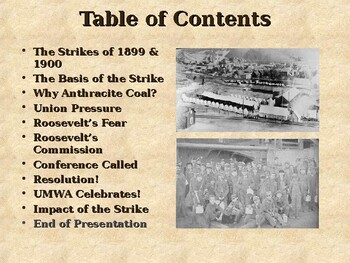 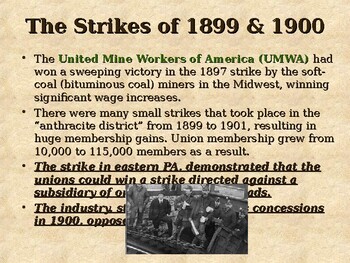 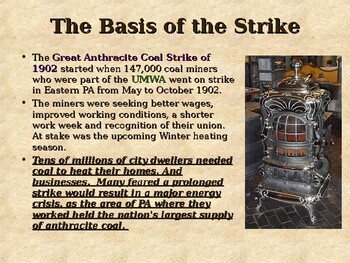 This is a highly animated, 13 slide power point presentation on The Great Anthracite Coal Strike of 1902. Each of the slides are editable so you may adjust the presentation to meet your individual needs.

The Great Anthracite Coal Strike started when 147,000 coal miners who were part of the United Mine Workers of America went on strike in Eastern PA from May to Oct. 1902. The miners were seeking better wages, improved working conditions, a shorter work week and recognition of their union.

Many feared a prolonged strike would result in a major energy crisis, as the area of PA where they work were striking held the nation's largest supply of anthracite coal. Anthracite—or hard coal—is solid and rich in carbon making it ideal for both industrial and domestic use.

The mines were owned by the railroads and refused to meet with the representatives of the union. As the autumn began and negotiations between the owners and the miners were ineffective. The price of coal doubled, and production dropped significantly.

President Theodore Roosevelt feared that a coal shortage would result in hardship to Americans during the winter and would have disastrous consequences for the Republican party if the anthracite strike dragged into November, when elections were to be held. Roosevelt worked behind the scenes by meeting with both company and union leaders but to no avail.

Roosevelt formed a commission to investigate the strike. Secretary of War Elihu Root and banker and industrialist J. P. Morgan, worried about how the strike would negatively affect his own businesses, convinced railroad leaders to abide by the findings.

On October 20, voted to end the anthracite strike. The miners eventually agreed to a 10% raise (instead of 20%), a reduction in the working day from 10 to 9 hours, and other concessions. By negotiating with organized labor Roosevelt championed a new approach to relations between capital and labor, often cited as an example of his “Square Deal.”

The presentation slides cover the following:

The Basis of the Strike

Impact of the Strike

This is one of many products I offer in my store under the heading Industrialization & Urbanization, Labor in the United States.