Labor Unrest in the U.S. - The Great Southwest Railroad Strike of 1886 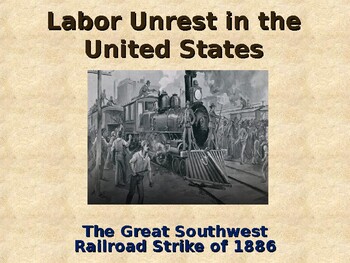 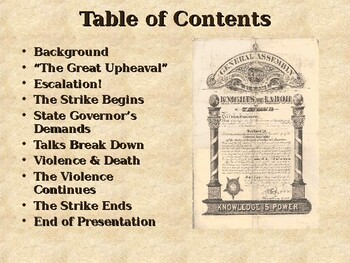 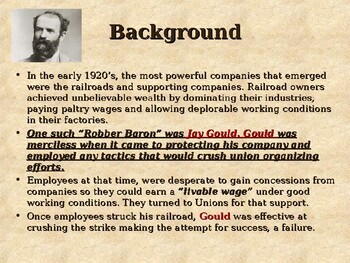 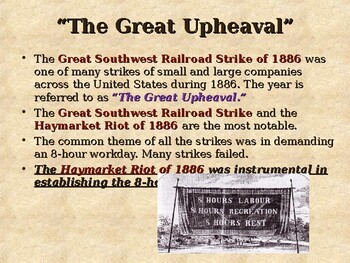 This presentation is a highly animated, 12 slide presentation on The Great Southwest Railroad Strike of 1886. Each of the slides are editable so you may adjust the presentation to meet your individual needs.

In the early 1920’s, the most powerful companies that emerged were the railroads and supporting companies. Railroad owners achieved unbelievable wealth by dominating their industries, paying paltry wages and allowing deplorable working conditions in their factories.

One such “Robber Baron” was Jay Gould. Gould was merciless when it came to protecting his company and employed any tactics that would crush union organizing efforts. Employees at that time, were desperate to gain concessions from companies so they could earn a “livable wage” under good working conditions. They turned to Unions for that support.

During 1886, there were many strikes of small and large companies across the United States. The year is referred to as “The Great Upheaval.” The Great Southwest Railroad Strike and the Haymarket Riot of 1886 are the most notable.

The common theme of all the strikes was in demanding an 8-hour workday. Many strikes failed. On May 4th, the strike was officially called off after a congressional committee advised the union to end the strike.

The railroad companies eventually prevailed by hiring non-union workers, resulting in the disbanding of the Knights of Labor and replacing it with the American Federation of Labor created on December 8, 1886. The strike was ultimately a failure.

The presentation covers the following slides:

This is one of many products I offer in my store under Industrialization and Urbanization, Labor in the United States.