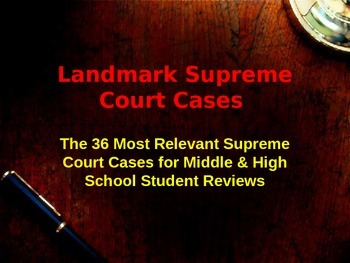 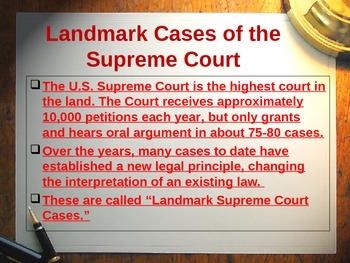 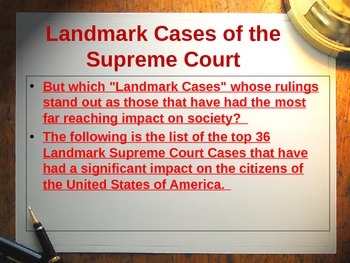 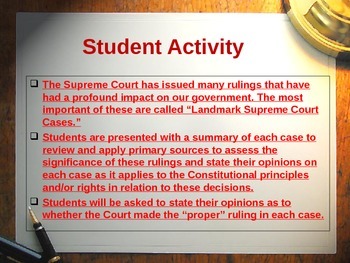 This is an 83 slide power point presentation that summarizes the 36 most significant Landmark Supreme Court cases that are most often reviewed in Middle and High School. It is a lengthy presentation, but is is set up so the teacher can select whichever case he/she wants to review.

The cases were selected to compliment Florida SS.912.C.3.10 for high school, but have application to all other states, both Middle and High School. The presentation is fully editable so you can customize to meet your needs.

Each of the 36 cases has one to three slides stating the issues and outcome of each case. All are picked for their significance and there is a healthy number of cases that the students will enjoy reviewing based on subject matter.

Students are presented with a summary of each case to review and apply primary sources to assess the significance of the individual rulings. They are free to state their opinions on each case as it applies to the Constitutional principles and/or rights in relation to these decisions with the consideration as to whether the Court made the “proper” ruling in each case.

The cases include the following:

Regents of the University of California v. Bakke, (1978)

I also offer each of these cases as individual power point presentation that are more detailed than this summary in my store. Each case begins with the title "Landmark Supreme Court Cases."