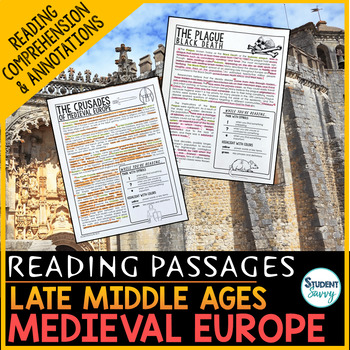 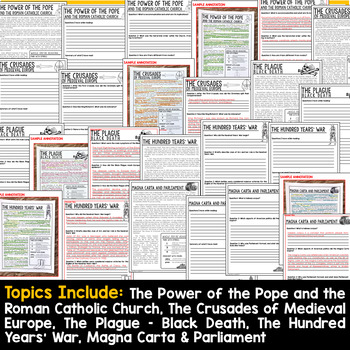 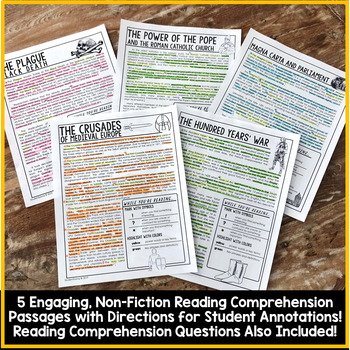 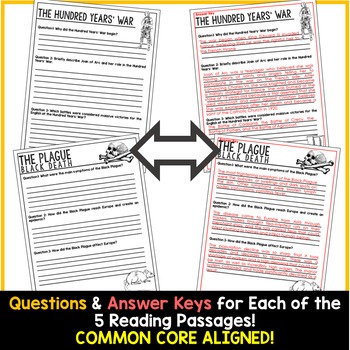 StudentSavvy
29.5k Followers
Follow
Compatible with Easel Activities
Create an interactive version of this PDF students can complete on any device. Easel is free to use! Learn more.

Questions & Answer Keys for Each of the 5 Reading Passages!

1.) The Power of the Pope and the Roman Catholic Church

-Describes the conflict between Henry IV and Gregory VII,

the conflicts of power and authority with appointing church officials

-Describes what it meant to be excommunicated from the church.

2.) The Crusades of Medieval Europe

-Overview of what the Crusades were and the purpose behind them

-5 reasons for the Crusades

-Summary of each Crusade and key events of each one. Saladin and Richard the Lion-Hearted and their accomplishments.

-Describes ways in which the Crusades were successful and not successful

-Overview of how the plague affected Europe. Describes the possible causes and what the symptoms of the plague were.

-Describes the impact of plague (fall of manor system, decline in trade, shortage of labor, etc.)

-Introduction/Overview of the series of wars between England and France

-Describes the highlights of the major battles

-Describes the end of the war during the Battle of Castillon

-Overview of the document King John was forced to sign.

-Describes the groundwork that the Magna Carta set for the Constitution, Bill of Rights, etc.

-Describes Parliament and how it limited the power of the monarchy

-Basics of parliament and the two houses

-Comparison of Parliament to the United States Congress.

Log in
to see state-specific standards (only available in the US).
CCSSRI.7.8
Trace and evaluate the argument and specific claims in a text, assessing whether the reasoning is sound and the evidence is relevant and sufficient to support the claims.
CCSSRI.7.7
Compare and contrast a text to an audio, video, or multimedia version of the text, analyzing each medium’s portrayal of the subject (e.g., how the delivery of a speech affects the impact of the words).
CCSSRI.7.6
Determine an author’s point of view or purpose in a text and analyze how the author distinguishes his or her position from that of others.
CCSSRI.7.4
Determine the meaning of words and phrases as they are used in a text, including figurative, connotative, and technical meanings; analyze the impact of a specific word choice on meaning and tone.
CCSSRI.7.3
Analyze the interactions between individuals, events, and ideas in a text (e.g., how ideas influence individuals or events, or how individuals influence ideas or events).