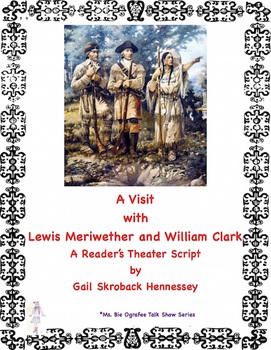 You may also be interested in my Lewis and Clark Expedition Webquest:

Lewis and Clark Expedition: A Webquest

Learn about Sacagawea with this Reader's Theater Script. Sacagawea is a guest on Ms. Bie Ografee's Talk Show and the studio audience asks questions about her life and contributions to the Lewis and Clark Expedition. There are 10 questioners, a Did You Know? fun fact section, comprehension questions, a teacher page with extension activities, the key and additional links. https://www.teacherspayteachers.com/Product/Sacagawea-A-Readers-Theater-Script-1782815

Part of my Ms. Bie Ografee Talk Show Series of plays, Lewis Meriwether and William Clark are guests on Ms. Bie Ografee's Talk Show. They share information about their expedition to explore the Louisiana Territory. There is a Did You Know? section of fun facts, reading comprehension questions and a teacher section with lots of extension activities, links and the key.