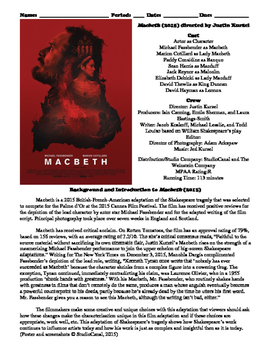 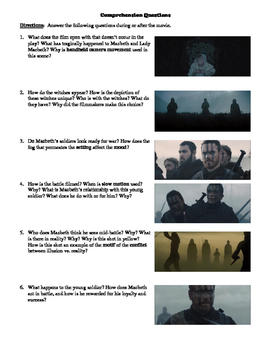 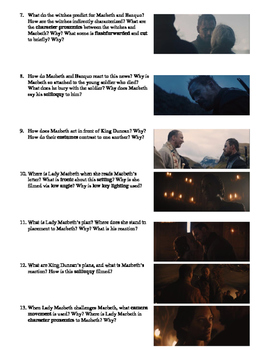 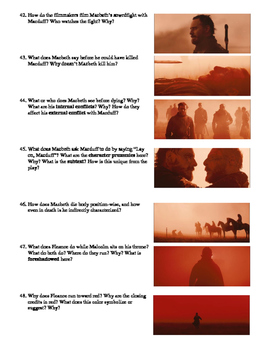 (803 KB|10 pages)
Product Description
The following ten-page study guide film packet is used to accompany the Justin Kurzel-directed 2015 drama film "Macbeth" adapted from Shakespeare's tragedy that stars Michael Fassbender and Marion Cotillard. It can be used in an English or film studies classroom. The first page contains a list of cast and crew and a background and introduction on the film from Wikipedia. The second page is a page that allows viewers to jot and take down their own notes. Pages three, four, five, six, seven, eight, and nine are comprehension questions to guide the viewer on the work's acting, camera movement, character proxemics, characterization, cinematography, color symbolism, conflict, costume design, editing, foreshadowing, inferences, irony, lighting, mise en scene, mood, motifs, plot, set design, sound, story, subtext, and tone. The tenth page contains discussion questions on the work's acting, adaptation choices, characterization, setting, and sound. Please note that this is a visually dark film; therefore, some screenshots may be difficult to see unless printed in color or projected for students to see.

A multiple choice quiz that can be used as a summative assessment that pairs well with this packet, a formative assessment, is available as a separate purchase by clicking here.
Total Pages
10 pages
Answer Key
Not Included
Teaching Duration
2 days
Report this Resource to TpT
Reported resources will be reviewed by our team. Report this resource to let us know if this resource violates TpT’s content guidelines.